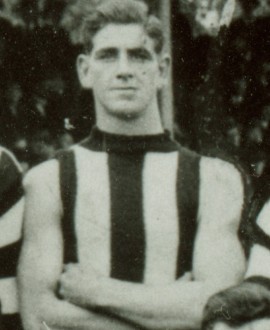 When Bill Glynn kicked three goals against South Melbourne in the opening round of the 1923 season, Collingwood supporters thought they might have found the big follower/forward every club looks for. Instead, after just one more game and another goal, his VFL career came to an unexpected halt.

Bill had come to Victoria Park from Hawthorn Districts (the junior club that effectively acted as Hawthorn’s seconds) at the beginning of 1922. He was a tall, strongly built man (reports said that only the renowned tough guy Percy Rowe could match him for height and muscular development) who was a good mark and had good endurance. He was earmarked early as a follower and that’s where he played most of his career.

He made his debut in the opening round of the 1922 season against Richmond, and managed to play seven games in a debut campaign that showed plenty of promise without ever quite grabbing the headlines.

That changed in the first game of the 1923 season against the Swans, when he was named in a forward pocket and managed to kick three goals, all early in the game (and including an uncharacteristically agile snap).‘Jumbo’ Sharland, writing in The Sporting Globe, could obviously see a good player in there, albeit with a rider. “Glynn would be a very useful follower for the Magpies if he could only kick better,” he wrote. “He has a good pair of hands for marking and can play hard and well.”

He missed the next week, then returned and kicked a fine angled goal against St Kilda – and missed several other gettable chance – before succumbing again to knee troubles. Just over a month later, he was surprisingly cleared to Hawthorn in the VFA, where he played seven games and kicked a couple of goals.

In 1924, Collingwood gave him the opportunity to return to lead the reserves (Collingwood Districts). But he hadn’t given up on his VFL dreams, and trained with Richmond in the pre-season. He was actually cleared to the Tigers in May, but didn’t play a senior game with them. Instead, in the middle of the year, he returned to Hawthorn Districts, where he would play a key role (at centre half-back) in their 1924 Premiership win.

That win was even more special for Bill, because one of his brothers, Eugene (better known as ‘Snoo’) played in the centre in the same team. Yet another brother, Leo, had been playing with Collingwood Districts and making quite a name for himself as a tough backman, coming very close to senior selection late in 1923. He tried to cross back to Hawthorn Districts midway through 1924 to play with his two brothers but the Magpies refused his clearance. He went to Brunswick instead. (In a remarkable story, Leo was involved in a nasty collision with a yellow cab while riding his motorbike in 1925: he was hospitalised with serious head injuries and ended up having a plate inserted. He recovered well enough to play nine senior games with Essendon in 1930!)

Bill did a lot of maintenance work in the late 1920s, his name regularly appearing in local papers as having won tenders to complete jobs at state schools and the like. He also sold items door-to-door as the Depression hit. He lived in Kew, and would later go on to a successful career in the insurance industry. A deeply religious man, he also had a wicked sense of humour and loved a prank.

Bill Glynn didn’t talk much about his football career in his later years, but surely could have been nothing but proud of what he achieved during his days at Collingwood.