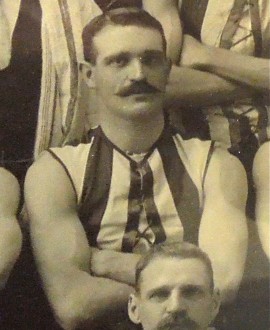 Those were the words Port Melbourne police constable Bill McCulloch uttered when he expressed why, at 43 and five months, he decided to enlist in the Australian Imperial Force in 1916.

Dressed in khaki, he was at a court hearing giving evidence in one of his last acts before sailing away to the front when the sitting judges stopped mid-trial to commend the policeman for setting aside his age and marital status to do the right and noble thing.

McCulloch was a well-known figure in Melbourne, but that had little to do with football. Sure, he had played 13 games for Melbourne in 1897-98 and 1900 before a transfer to Collingwood in April 1901 saw him represent the Magpies in 11 games that season and a further game in 1902.

His first game for Collingwood came in Round 1, 1901, after his clearance came through at the end of April. That game was also Ted Rowell’s first game for the Magpies, as it was for Peter Martin, who would become known not necessarily for his football, but for his premature death at Caulfield Hospital in March 1918 following wounds suffered at Pozieres almost 16 months earlier.

McCulloch played at half-forward for much of the 1901 season and was a member of Collingwood’s losing grand final side to Essendon. He returned the following season, but managed only one more game for the Magpies.

But the respect he held primarily came from the contribution he made to the community as a policeman, where he was universally described as a “respected and popular officer … and a good friend of the poor.”

In the lead-up to the First World War, McCulloch was stationed in Port Melbourne, where he was also the prosecuting officer at the local court. He joined up as a gunner of the Field Artillery Brigade and he was farewelled with a gala night at the Victoria Hotel in Bay Street.

A large gathering bade farewell to “Bombardier” W.J.McCulloch and he was presented with “a purse of sovereigns” from the grateful residents of the suburb. When he got up to speak, McCulloch had the audience in the palm of his hands as he spoke about the need to do his duty on a grander scale, stressing that “a man is what he makes of himself.”

He embarked from the suburb in which he served – Port Melbourne – on the Ulysses on October 25, 1916 and disembarked at Plymouth just a few days after Christmas. From there, he proceeded to France in the middle of the next year and served his country and his comrades well. He kept those back home aware of his progress, writing to many people and having some of those letters reproduced in the local newspapers.

In a letter home printed in September 1917, McCulloch wrote that he was “doing well in every way” and said that he had met many Port Melbourne “lads” on his travels. He said the orchards of France “are looking a picture and the soldiers are looking forward to a feast of fruit.”

A month later in another letter sent from Belgium, he admitted that “the road has been hard.” Still, he said, he would “not have missed the experiences he has passed through for anything.” Fortunately, he came through those tough times and returned to Australia in the middle of 1919, when he was almost 47, and deserving of a break following the end of the war.

But McCulloch had more to give and he served as a policeman in South Melbourne for a time before requesting a return in 1926 to nearby Port Melbourne. Such was the esteem that he was afforded in the region that the residents of South Melbourne presented with him “a handsome clock” for his service to the suburb.

He lived a long and prosperous life, dying just a few months short of his 79th birthday, on September 3, 1951. It was also four days short of the 50th anniversary of his 1901 grand final appearance with Collingwood.