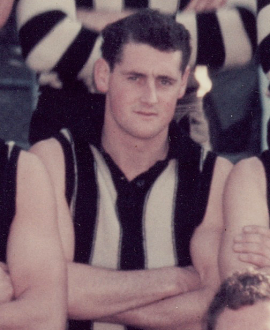 A brilliantly-talented centreman from CBC Parade, Serong combined football with legal studies. He earlier had been transferred to Terang as a teacher and Collingwood had to fight off Geelong for his signature.

Serong also was Australian handball champion and later captain-coached Echuca. Serong was quick and strong and had tremendous agility, even being used as a rover at one stage.

He was runner-up to Bob Skilton and Verdun Howell in the 1959 Brownlow Medal count and was Magpie vice-captain in 1961.

He was surprisingly dumped by Collingwood, but at North won the best and fairest in his only year and was mentioned as a possibility for the coaching job in 1963, but his job in the legal profession caused his retirement from the game at 27.

He was a valued member of the famous 1958 flag win.