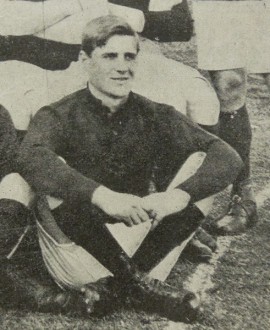 Like many footballing soldiers, Billy Holmes’ war years proved to be a turbulent time. Unusually though, most of Billy’s troubles in uniform came at home, rather than on the battlefields of Europe.


William Frederick Holmes was born in Bendigo in 1890, and won a solid reputation in the early years of the 20th century playing with California Gully. The Bendigo region was a fertile one for Collingwood in those days, and it produced names such as Dan Minogue, the Baxter brothers, the Daykins (four of whom played VFL football), Fred Fielding, Joe Scaddan and others. Indeed Holmes played alongside Minogue while with ‘the Gully’.

Billy was a strong defender who was a good mark and he became a mainstay of the Gully defence after starting his career in 1907. In 1910 he had his best year yet and was named in a Bendigo representative team late in the season. The Magpies were impressed and, like Minogue, he made his way to Victoria Park for the 1911 season.

He made his debut against Essendon, after which the Argus said he “played very well indeed”. The Australasian said he “played very nicely on the rear-most line”. But even those positive reviews couldn’t save him: he was dropped after that one and only game and never came back. Collingwood released him to Northcote midway through 1911. He did well enough there to earn a second crack at the VFL, this time with Fitzroy.

The Roys made better use of Holmes’ strength and marking ability, employing him mostly as a follower/forward, and he played 16 games, kicking 11 goals, in his one season at Brunswick Street. He stayed in the same role when he crossed to Footscray in 1913, where he played an important part in their Premiership campaign, proving ‘sturdy and effective’ and named among the best players in the grand final.

But in 1914 he was on the move again, this time to Prahran. Late that year he joined the Australian Imperial Forces, and so began his military misfortunes. Initially he was attached to the military police at the Broadmeadows Camp, but in April 1915 he went AWOL, claiming his wife had a serious illness and needed to be looked after. He was arrested in May on a charge of desertion and faced a court martial.

To make matters worse, Billy’s wife took court action against him for leaving her without means of support, because he hadn’t been paid since leaving camp. She was eventually awarded support but he was unable to do anything to help because he was still confined to his tent awaiting court martial!

Billy stayed in custody for weeks as his case dragged on without resolution, and in the end it took the intervention of the Camp Commandant who took a look at the evidence and decided the charge of desertion couldn’t be sustained. Billy’s application for discharge was eventually approved in June and he returned to his career as a rubber worker, living in Keele Street Collingwood.

But that frustrating experience didn’t deter Billy from fronting up for a second go with the army, and he enlisted again in May 1916. His time overseas was brief and unfortunate, being hospitalized with mumps, and he returned to Australia early in 1917 for what were described as “family reasons”. He said his wife was by this time an invalid suffering from hip disease and unable to care for their two children, aged five and seven. She had had to remove the children to a friend’s care before he came home.

But the discharge got ugly after a Collingwood detective, asked to ‘discreetly’ confirm Holmes’ story, cast some doubt on it. So even though Billy was home, his discharge was refused and he was sent to Langwarrin Military Camp. Once again he spent an extended time in confinement before his discharge was finally confirmed. He later seems to have returned to football with Northcote in 1919, playing mostly as a forward pocket and resting ruckman.

Like so many young men, the First World War deprived Billy Holmes of his prime sporting years. But even though he only played one game with Collingwood, a footballing CV that includes games with two VFL and three VFA clubs shows he was a more than handy player.