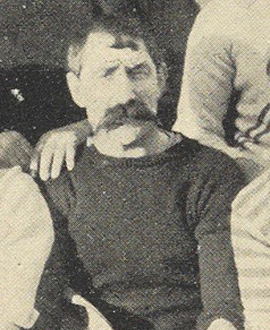 Collingwood leant heavily on Tasmania as a source of recruits in its earliest days, with names such as George Watt (who captained the team in its first ever game), the controversial Dick Langford and Ken Macpherson all making their own marks at Victoria Park.

Billy Markham’s impact was less pronounced than that of his fellow Taswegians, lasting less than half a season. But even in that time he was able to show why the newly-formed Magpies had been so keen to recruit him.

Partly that was down to experience. The new club was light on for hardened bodies, and Billy was around 26 and had already been playing for many years in Tassie. But equally it was down to his fine kicking and grand marking, with both considered to be the trademarks of his game.

He had played many fine games in Hobart for both the City and Railways clubs when he crossed to Collingwood prior to the 1892 season. He was big and strong and possessed a wonderfully rich moustache. A Hobart newspaper would later describe him as “a reliable man, and second to none as a back.” A writer by the name of ‘Old Timer’ in The Referee also noted: “Billy Markham could ‘mark ’em’ – there is no mistake about that. Aeroplaning was his forte, so he was aptly named. He was also a magnificent kick.”

He did well in his first outings for Collingwood, playing firstly at centre half-back and then at half-forward. After the club’s first ever game against Carlton in May of 1892, The Sportsman said he had “distinguished himself with his all-round play”. The Argus said he was “conspicuous in defence”. He then showed his versatility by kicking a couple of goals while playing forward.

But he didn’t settle in Melbourne longer-term, and after playing the first six games of the season he returned home to Tasmania (together with Langford) and resumed playing with Railways. He would later also play with City, and for southern Tasmanian representative sides. He also would help form the St Mark’s Football Club in 1909, and was still playing well into his 40s, some 20 years after his time at Collingwood. He later moved to Sydney. The Hobart Mercury remembered him this way:

“Together with George Watt and Dicky Langford, ‘Billy’ Markham gave Tasmanian football a good advertisement when the Magpies first figured so well across the water. Time has treated [him] lightly, and he looks as young and as sprightly as he did in those good old times when he would drop kick or place kick a goal at any distance from 20 yards up to 60 yards.”

Billy Markham had the perfect footballing surname, especially for one who could catch the ball better than most. Luckily he could also kick it superbly. But unluckily he wasn’t able to sustain a long enough career to give his talents the showcase they deserved.