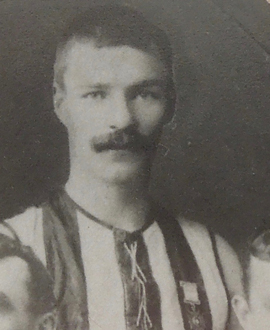 A talented forward with a good eye for goal, Billy Spears had a stop-start and ultimately brief VFL career – punctuated by a stint in the Boer War.

The son of a former Carlton player who played back in the 1880s, William Spears was first spotted while playing with Camberwell Rovers. It was from there that Carlton plucked him for his one and only senior game in the navy blue jumper late in the 1901 season.

After the season ended he went to South Africa and served in the Boer War with the Fifth (Mounted Rifles) Contingent, but he was back in Melbourne by April of 1902 and soon after began playing with Collingwood Juniors.

He made a very good impression there. After an early game in which he snapped a brilliant goal over his head, The Herald enthused: “Wood juniors have got a first class footballer in Spears.”

He played 16 games for the Juniors team that year, and that was enough to earn him a spot in the senior side for the opening round of the 1903 season, alongside another debutant called McHale. He was named in a forward pocket and kicked a goal. The Australasian would later remark that both newcomers “had acquitted themselves admirably” that day against Carlton. That didn’t stop Spears from being omitted, and a few weeks later he was cleared back to Collingwood Juniors, his senior career seemingly over.

But after a handful of useful games for the Juniors, he returned to the seniors in Round 12 and played five of the last six home-and-away games of the year. Sadly he missed out on selection in the finals series, and especially the successful Grand Final.

After that, it’s not 100% clear what happened to Billy Spears. He was granted a clearance to Richmond in 1906 but never played a game there. There was a W Spears (sometimes listed as Spear) playing with Burwood from 1905 onwards, and another – again with alternate spellings – playing with and captaining Camberwell for much of the same time! Our best guess it that there was a William Spear and a William Spears playing at roughly the same time, just to make things entirely confusing.

Still, there’s no confusion about his time at Collingwood. He might only have played six games in 1903, but they were enough to give him one great honour – an appearance on the club’s official commemorative artwork to mark that year’s Premiership. That’s not a bad reward for a brief outing at the top.