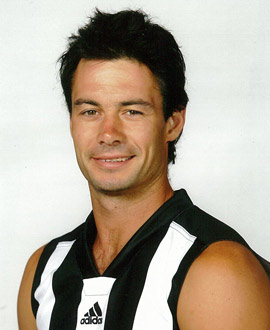 A classy half forward best known for his role in Essendon’s all-conquering premiership team of 2000, Caracella provided good service in his two years as a Magpie.

Blessed with football smarts and the uncanny knack of finding space, Caracella was a reliable set shot for goal, slotting 34 of them for Collingwood in 2005.

Salary cap pressures forced Caracella to leave both Essendon and Brisbane, and he landed at Collingwood with the second selection in the 2005 pre-season draft.

Still only 28, Caracella stood tall during a difficult five-win season for the Black and White.

He kicked four goals from eight scoring shots against Adelaide in round two before bagging five goals in two games running as his team got on a winning streak against West Coast and Hawthorn.

His performance against the Eagles was his most memorable day as a Magpie, for it propelled his 16th-placed team to victory over its then undefeated opponents and earned him three Brownlow votes in the process.

Caracella’s form tapered as the season wore on, kicking just three goals in his last six games as injury began to take its toll on both him and his teammates.

Season 2006 began brightly for Collingwood’s No. 10. He won 29 disposals against the Hawks in a new role directing traffic across half back in round two and returned 25 more in big wins over Geelong and the Western Bulldogs.

Sadly, the career of the dual premiership forward came to an abrupt end when he collided with former Brisbane teammate Tim Notting on the southern wing at the MCG in round 10.

Caracella, who had bravely put his head over the ball, came within millimetres of being paralysed.

He was stretchered from the ground and, after an attempt to return, announced his retirement late in the season.

He was made a forward line coach on the eve of the finals and retained a role as an assistant to Mick Malthouse until the end of 2009, coaching the team in his own right in a pre-season match against Essendon in February ’09.

Prior to arriving at Collingwood, Caracella kicked 151 goals in 126 games for Essendon. He was a pivotal player in their 2000 premiership, kicking 35 goals for the season, and represented Australia in the International Rules Series in 2000 and again in 2001.

He landed at Brisbane and played in his second premiership in his first season at the club, against Collingwood, of all teams, in 2003, when he kicked two goals in Brisbane’s 50-point win.

One of the many Northern Knights players drafted during the mid-1990s, the boy from Parade College hailed from the same team as Jarrod Molloy, Brent Harvey and Anthony Rocca.