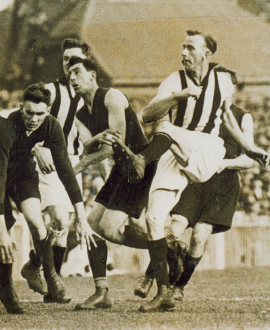 Take a close look at Collingwood’s 1927 team picture and you will notice a clever piece of photographic licence – the inset of a player in the back row. The player whose picture was added later was Bob Makeham, one of 12 to play in all four Premierships and one of the quiet achievers of “the Machine”.

When the photograph was taken, it’s most likely that Makeham would have been out tossing hay or milking the cows on one of his farms at Woodleigh in country Victoria, far from the madding football crowds. It was there, on the land, that this easygoing, prematurely balding, genial giant felt most at home. He loathed the city life, its hustle and bustle, and tolerated it only in small doses so that he could play football at the highest level at the club he came to love.

Makeham saw football as a good distraction from farm life, though he had no desire to live in the city on a permanent basis. In 1928 he said: “It (football) is a break from the monotonous drudge of the farm.” So, for 10 seasons and 157 games, the 185cm, 85kg “real Australian” toiled tirelessly on the farm through the week before coming to Victoria Park for training on Thursday nights. He would return home the morning after matches.

The sharp eyes of the Baker boys from Wonthaggi, Ted and Reg, helped to send Makeham to Collingwood in 1923. After watching him in country football, the brothers told coach Jock McHale that he was a player who should be invited to training. When Makeham began pulling down marks at practice alongside Charlie Tyson, Gordon and Syd Coventry, Joe Poulter and Percy Rowe, Collingwood officials began to take notice. While he was a little slow to hone his bush skills into VFL ones, it was not long before he became one of the team’s mainstays.

A scrupulously fair player and one of the longest punt kicks in the game, the versatile Makeham played a number of key roles for Collingwood – in attack, defence and sometimes as a follower with Syd Coventry. His durability was remarkable, given the thousands of kilometres he had to travel each year. Makeham stepped out in Black and White in 78 of the club’s 82 games in those stellar 1927–’30 seasons, missing three of those matches because of selection in the Victorian state side.

Makeham credited the success of the “Machine Team” to the camaraderie of the entire group. Even though he mixed with the team only a few times a week, he was a very popular member of the side. “We have no bickering and everyone is a friend,” he told the Sporting Globe in 1928.

One of Makeham’s great strengths was his ability to perform at his best when it mattered most. Syd Coventry wrote that he “never lets us down when we want him”. This is borne out in Makeham’s performances in the four premierships. He was one of the best afield in appalling conditions in 1927 and made valuable contributions in both 1928 and 1929 (the latter despite being groggy after being knocked out).

But it was his contribution in the 1930 Grand Final that stands as his finest hour. He rose to the occasion when the club needed him most, trailing Geelong by 21 points at half-time and with the much-coveted four-in-a-row target seemingly in tatters. The team then produced a stunning third-quarter turnaround by kicking 8.6 to 0.1 to grab the match. Makeham had much to do with that dramatic revival, kicking two third-quarter goals and dominating the play. One critic said he had “never been seen to better advantage”. He received fitting recognition for his performance by winning the Palais Royale Cup as the best player afield.

Makeham managed four games for the club in 1932 to qualify for his 10-year service, something of which he was immensely proud. In the early 1930s he served as captain and coach of Maryborough, after the Bendigo club sought McHale’s counsel about which of his players would be suited to the role. The Collingwood coach had no hesitation in nominating Makeham, who did not let them down, leading them into a Grand Final.

An accomplished violin player, a clay bird and live bird shooting champion and a good tennis player, Makeham was much more than just a footballer. He continued to work on the farms for decades, and then operated a number of other successful business ventures, including hotels in Korumburra. A wealthy man who never had children, he was a philanthropist to many hospitals and charitable organisations. He also used to donate money to the Collingwood Past Players’ Association. But he never lost the common touch. Relatives remember that later in life his Labrador dogs used to jump into the back seat of his Mercedes and go wherever he did.

Sadly, Makeham took his own life in 1974, at the age of 72, believing he had a serious illness. It was hardly the end that befitted such a larger-than-life character. One death notice in the paper at the time concluded: “A gentleman is at rest.” No one who knew Bob Makeham, farmer and footballer, would disagree.

This story first appeared in the book The Machine, by Glenn McFarlane and Michael Roberts.