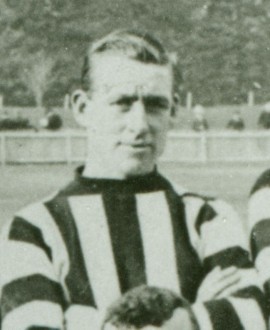 Laurie Nash is one of the most famous figures in Australian football – a brilliant and mercurial player with South Melbourne in their golden era of the 1930s, an Australian Test cricketer and a great character who mixed flair with a nice touch of arrogance.

But it is often forgotten that his father, Robert, was a pretty talented footballer too, who went as far as captaining Collingwood. And while his game lacked the spectacular traits of his son’s, the two did seem to share a tendency to be followed by controversy.

The Nash family links go back even further than Robert though. His father, Mick, was a promising junior player who appeared at Carlton in the 1880s (though there’s no evidence he played a senior game), and one of Mick’s brothers, Tom, enjoyed several years with the Blues seniors in the 1870s. Given that, it was hardly surprising that young Robert, having gone to Prince’s Hill State School, found himself playing with the Carlton Juniors team in 1903, while still a teenager.

The pathway from there seemed clear: he was surely destined to end up a Carlton player. But somewhere along the way the system fell down. Carlton was in the final stages of its relationship with the Juniors (like Collingwood, they would instead move to a new relationship with their District team), and the secretary of the Juniors would later point to Nash as an example of one who should have been a Carlton player but who had ‘slipped through the cracks’.

Whatever the reason, Robert went from Carlton Juniors to Coburg in 1904. He made quite a mark there, including booting seven goals in one game, and Collingwood snapped him up midway through the season. He debuted against Fitzroy at Victoria Park in Round 11, playing as a forward, and kicked two goals in his third game and a further three in his fourth.

But despite his early forays in the front half, the Magpies seem to have decided early that he would be better off as a defender. Indeed when Bill Proudfoot looked unlikely to play on in 1905, the Magpies publicly earmarked Nash as his successor at full-back.

And that’s the way it proved to be, with Proudfoot barely playing after 1904 and Nash – by now mostly known as Bob – gradually assuming the role.

Bob was a big man, like his dad, and his two key strengths were his strong high marking and splendid long kicking. While he continued to spend time forward throughout his career, with occasional stints on the ball, it was as a full-back that he made the biggest impression. He was tough, solid, dependable, hard-working and played with the kind of never-say-die spirit that seems to mark true leaders.

By 1906, at least one newspaper ranked him among the two best key defenders in the game. In 1908, he was chosen as part of the Victorian team for the inaugural ANFC Carnival. “Nash makes a stalwart defender, and can be depended upon to shake up the fowl house when the game is going the wrong way,” wrote Punch in 1907. In the same year The Argus wrote: “Nash covered himself in glory in a lion-like defence. Collingwood’s defence was as solid as a wall, with Nash always that wall’s chief buttress.”

Midway through 1908, when Eddie Drohan decided to give away the captaincy he’d only taken on at the start of the year, it was Bob Nash who stepped up to the plate to fill the breech. He carried the role into the 1909 season, too, and seemed to have the hallmarks of a top leader. “Bob Nash thoroughly understands the game and knows how to handle his charges,” said one journalist.

But he did, it must be admitted, also have a propensity for attracting headlines.

Late in 1907 he was suspended for three weeks for hitting a St Kilda player – a disqualification that one newspaper described as “ridiculous”, but largely on the basis that he’d committed a much nastier assault earlier that had gone unpunished. In 1909, while captain, he was attacked by Richmond onlookers after a game while returning to the rooms. A Richmond player was subsequently rubbed out for the season for belting him, but he claimed Nash had provoked him both physically and by using bad language towards him. It became quite the heated hearing.

On a less serious note, in 1908 he had the chance to stop a third-quarter shot on goal by Essendon but didn’t take it, believing the bell had rung before the ball was kicked. But the umpire controversially allowed the goal to stand, despite Magpie protests, and almost inevitably Essendon ended up winning by five points.

At the end of his second season as captain, Bob Nash decided to end his VFL career and take a step back, despite being just 25. He joined Footscray as captain-coach in 1910 and stayed there until 1912. In 1913 he started work as a policeman, and then in 1915 Collingwood stunned the football world by announcing that the 31-year-old would be returning to Victoria Park as a possible back-up to play full-back, with Ted Rowell having retired. But that never eventuated – even though his impending return was announced at least once – and he ended up captaining Collingwood Districts to a Premiership instead.

But he wasn’t there on Grand Final day, as he’d been suspended for life in August after chasing the Leopold captain into the grandstand and repeatedly punching him, after the Leopold player had leapt the fence to attack a fan who had called him an offensive name. The penalty was later downgraded to two years.

That seems to have been about it for his football career. In 1916 he lost one of his brothers, Felix, who was wounded in First World War fighting in Poziers Wood but continued trying to rescue fallen comrades despite having had both feet blown off. He died 12 hours later. (Another brother, Tom, was a prominent middleweight boxer).

In 1918 he was stationed in Hamilton with the police force, and while there he starred in country cricket. He returned to Melbourne in 1922, spent time in Tasmania in the late 1920s and was still involved with footy and cricket into the 1930s

Bob and Laurie Nash remain one of the best-performed but least celebrated father-son combinations in VFL/AFL history. Laurie has certainly received his fair share of acclaim over the years, but Bob seems to have been unfairly overlooked. He enjoyed a fine – and at times colourful – career, was one of the best defenders in the game for a few seasons and led our club for 18 months. That alone is worth celebrating.