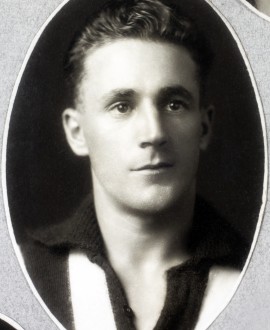 Loyalty was one of the hallmarks on which the Machine was built. The bulk of the team subscribed to this premise, from the stars to the battlers.

Bob Ross was neither a star nor a battler. He was a talented, courageous rover/forward with good skills and a humility that endeared him to his teammates. When he joined the club in 1929 he was a pint-sized player (163cm) described as a “local rover of exceptional ability”. But he faced with the arduous task of winning a spot in a team that would go through the entire home and away season undefeated.

For Ross it was a case of being in the right place at the wrong time. There was no other VFL club he wanted to play for, but Collingwood already possessed champion rovers in Harry Collier and Bill Libbis and Ross knew opportunities would be hard to come by. Even when that lack of opportunities finally got to him and he decided to move, he transferred not to Fitzroy or Richmond, where big money was on offer, but to Northcote in the VFA. Ross insisted he could never play against Collingwood, or against his former teammates.

Born at Sunnyside, near Omeo, Bob Ross moved with his family to Yarra Sreet, Collingwood. He and his brother Jack, who played for the Magpies in the 1935 and ’36 flag teams, attended Cromwell Street State School. Bob recalled: “That was the natural thing as kids – you wanted to play for Collingwood. You’d have played with them for nothing.” Ross was finally afforded the invitation he craved.

For six weeks in 1929 he was an emergency in the senior team before getting his chance in Round 10 against Carlton. After his debut, the Sporting Globe remarked on his excellent anticipation and handling, his cool head and his deadly accurate passing. “The nuggetty little rover and forward came through the severe test so well that he is certain to become a permanent member of the combination.”

Unfortunately that wasn’t how things turned out. Ross managed four games for the season, but every time the Magpie regulars returned from injury, he was dropped. “You’d have to be dying before you’d say you couldn’t play”, he recalled.

Nobody doubted his ability. He was brilliant at getting the ball out of scrambled situations, handled it cleanly and delivered it expertly. He also had a sharp football brain and knew exactly where to be to make the most of his ruckman’s tap work. He was also surprisingly good overhead. In all, he was a top quality rover.

His reward in 1929 came when he won the VFL competition best and fairest in the reserves. He managed a further half dozen senior games over the next two years before finally accepting that his dream of a long Collingwood career was not going to happen. In 1932, still frustrated by lack of opportunities, he transferred to Northcote permanently, where he excelled. He played in four Northcote flags and won the 1932 Recorder Cup as the best and fairest in the VFA. He was too good for the VFA, and too good for the VFL seconds, but not quite good enough for a spot with Collingwood – and that was the only VFL club he was willing to play for.

There was one further honour he won but did not claim, however, and this summed up his modest, low-key personality. In the mid-1930s he was voted the most consistent for Northcote by patrons of the Plaza Theatre. When Ross discovered he would have to give a speech, he failed to front up to the night and the trophy remained uncollected. He did return to Collingwood years later, when he and Jack became foundation members of the Past Players Association. Until the end he remained loyal to the club he’d always loved.