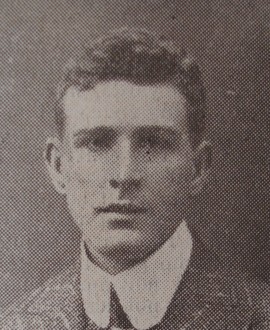 Bob Strachan knew all about the dangers of explosions. As a gunner in the 12th Field Artillery, he experienced some of the biggest bombardments during the First World War and suffered serious injury when a shell burst in front of him at Ypres in September 1917.

The wounds were significant enough to bring about his evacuation to England for treatment, with his shoulder almost wrecked. It would lead to medical discharge and a return home to Australia in 1918.

That was meant to be the end of the danger for him in terms of explosions.

Tragically, a decade after his near-miss on the front line, the one-time Collingwood footballer would die in the most horrific of circumstances – from a fuel explosion in his car in far-north Western Australia. He was only 41, and had lived in that state as a sheep station manager or shearing contractor almost since he had left Victoria, in the years before sailing off to war.

Strachan was born in Melbourne on May 21, 1886, and spent his childhood years in the leafy eastern suburbs. He attended Scotch College from 1898 to 1901. He came to the attention of the Collingwood Football Club after impressing with Box Hill and his size (exactly six foot, according to his army record) meant that he was considered a likely recruit in 1904.

Strachan was a fortnight short of his 18th birthday when he made his debut for the Magpies, against Geelong at Victoria Park in Round 1. He performed well enough to play in seven matches in that first season and promised to get even better with more experience.

As a gifted ruckman and occasional forward in 1905, he represented the club in 17 games – his best season return from his career at Collingwood – and was a member of the club’s losing Grand Final side to Fitzroy. Strachan kicked 14 goals for the season, but could not trouble the scorers in that Grand Final. He played a further 16 games in 1906, and by this stage had won himself a handsome reputation as a follower.

But Strachan surprised the club by quitting and heading to Maffra in 1907 – he was announced as one of the club’s departures pre-season – though he returned for two games late in the year. He again missed the first half of 1908 with rural commitments, but returned for the last eight games of the year, including the semi-final against Essendon, which was his 50th match.

Strachan left Collingwood for good before the start of the 1909 season when he attained a job on a station in the western districts. He returned to play two games for the Magpies in 1910 towards the tail end of what would be a premiership season, but he was overlooked in the finals.

Employment opportunities saw Strachan leave for Western Australia in either 1911 or 1912, and he came to work on sheep stations and properties across the vast state. He was “a very prominent footballer, playing with Rovers Football Club” and he would also become a member of the Geraldton representative team, which won the 1912 Sandover Cup as part of the country championships in Perth in 1912.

Strachan enlisted at Geraldton in September 1915, and underwent training at Blackboy Hill base near Perth, just over a year after the outbreak of war and as the Australians fought doggedly at Gallipoli. It wasn’t until January the following year that he sailed with the reinforcements of the Field Artillery Brigade on the HMAT Themistocles bound for Egypt. He spent time there undergoing more training, and then left in the middle of 1916 to head to France.

There, he became a Corporal, and gave “honourable” service to the cause until he was badly wounded during an attack near Ypres in September 1917 – two years after he enlisted. His wounds brought about a discharge on medical grounds and when he returned home he chose to go back to Western Australia, where he became a respected manager on several properties and stations.

A letter from the army to his mother in Canterbury in 1923 requested his location, and she told them Strachan was “travelling” in Western Australia as he worked his way through stations sometimes thousands of miles apart.

Only a few months before his death in 1927, the Sunday Times said: “the state has no more travelled man than Mr R.W Strachan, whose pastoral activities take him from one end to the other” in his Chrysler, which was “bought … as a means of sure and speed transportation.”

What happened next was, according to a local newspaper, “one of the saddest tragedies in the history of Marble Bar.”

He had been travelling with a friend one late June night when the “shearing contractor and good fellow” was forced to the side of the road due to an issue with his car’s petrol tank. The Sunday Times recorded: “(Strachan) was at the back of the car taking petrol from the tank when the accident happened. He had already got out three bottles and then when he wanted to screw the cap on the petrol tank, he could not find it. It was dark, so he asked the passenger who was in the car to strike a light and when this was done, the petrol exploded and Strachan was enveloped in flames.

“Mr Mallett, the owner of Limestone Station, tore the clothing off Bob as well as he could and was seriously burnt while doing so. Strachan was terribly burnt, but lingered for a day.”

Strachan was taken to Marble Bar Hospital, but the burns were too extensive for him to recover. And when he died, men and women of the region mourned the loss of a man “respected by all classes.” One newspaper said he was “admired for his manly ways” and another explained how eight motor cars conveyed mourners to what was the biggest funeral Marble Bar had seen for many years. “Vale Bob Strachan – soldier and a man,” was one fitting epitaph in the Sunday Times.

On the day of his funeral, shearing teams from across the state came to pay their respects and those unable to make the journey put down their shears for 15 minutes to remember him.

His wife, Margaret, placed a death notice that reflected her grief, but also her faith at that extremely difficult time. To close it off, she added: “Behind all shadows stands God.”