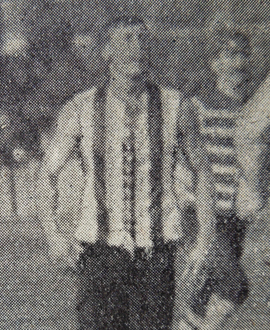 Bob McCubbin was an outstanding player with Williamstown for much of the 1890s. He twice tried his luck with so-called ‘bigger’ clubs – one of which was Collingwood – but neither adventure turned out as he would have liked.

McCubbin – a relative of revered Australian painter Frederick McCubbin – came from Woodend to Williamstown for the 1891 season, and almost instantly became one of that team’s best players.

The VFA was the only elite competition in those days, remember, so McCubbin was playing against the best teams of the day, including Essendon, South Melbourne, Fitzroy and, from 1892, Collingwood. The Pies saw plenty of him over the next five years, and they would have liked what they saw.

McCubbin was a follower – an on-baller who quickly became a key part of Williamstown’s ruck division. He was a high quality player whose consistency became a byword. He rarely played a bad game, and played plenty of very good ones. He was a splendid mark and a fine kick, moved well and was also handy around goals.

McCubbin wasn’t a showy or flashy player, but his understated style and consistency won him plenty of admirers. He was regularly described with words like “manly”, “sterling” and “wonderful”. This description from The Australasian in 1894 was typical: “Williamstown have a sterling all-round worker in R McCubbin, who week after week battles manfully for them in the ruck, regardless of the odds arrayed against him.”

In just his third season he was chosen to represent Victoria in two intercolonial matches, the first against South Australia and the second against Norwood. He did well in both and was mentioned among the best players. He was regularly named in newspapers’ ‘best followers’ of the season, especially between 1893 and 1895.

One of his best traits was calmness under pressure, something he’d exhibited off the field as well as on. In 1886, as a teenager, he’d rescued a fellow youngster from drowning in the Woodend waterhole, an act of bravery for which he was given an inscribed gold pocket watch by the Woodend community. Eleven years later he intervened while passing by a house that had caught fire in Woodend, saving the property from destruction by dousing the flames in the bedroom before the fire brigade had even arrived.

Williamstown wasn’t the strongest team in those days, so it’s hardly surprising that a player of McCubbin’s quality wanted to try his luck elsewhere. His first attempt to do so came after just two seasons, when he turned out with Melbourne in some 1893 practice matches.

When he applied to the VFA’s permit committee for the necessary paperwork, however, he found them in unforgiving mood. Amidst growing concerns about players being paid to transfer to new clubs, the committee refused to grant McCubbin his clearance. McCubbin told them he had thought his expenses were being paid by Williamstown supporters and not the club itself, but his explanation didn’t wash, and he returned to the Seagulls’ fold.

His older brother George had been playing at Footscray but joined him at Williamstown in 1894. That seemed to end any wanderlust, and Bob settled back into being one of Willy’s best players.

McCubbin wasn’t up to his best in 1897, however, and as he was nearing 30 many began to assume that his time at the top was coming to an end. So it was something of a surprise when Collingwood – by then in the VFL – asked him to trial with them for the 1898 season. He did well enough in the practice matches to be included on the list, making his debut against Geelong in the opening round of the season.

But though he kept his place for six matches, he didn’t do enough to make much of an impression. By the next year he was back playing local footy with Woodend again, where he played for a time alongside another former Magpie in Bob Sause. The McCubbin brothers were big in Woodend, involved not just in footy but also cricket, tennis, the rifle club and even the fire brigade!

Bob never married, but lived with his spinster sister Annie in ‘McCubbin Cottage’ in Woodend. His famous painter relative Frederick would sometimes drop by while on summer holidays at his own Mt Macedon retreat, ‘Fontainbleu’, and they would talk of their shared Scottish heritage.

Bob finally retired from the game in 1903, at a special end-of-season social night at the local Mechanics Institute hall. He was captain by this stage, and named the team’s best player for the season, awarded a specially engraved watch from the Castlemaine Standard Brewery.

Presenting him with the medal, a local councillor congratulated him on his 16 years involvement in the game, noting his “fair and square tactics, and his unfailing good temper”. In response, Bob announced he was retiring from the game – a classic case of going out on top.

There is no doubt Bob McCubbin was good enough to have played more footy than he did with Collingwood. But he turned 30 in the year he pulled on the black and white jumper for the first time, and it’s hard to escape the conclusion that he’d just left it a little too late to be seen at his best. Because Bob McCubbin in his prime would have been a welcome addition to anyteam.