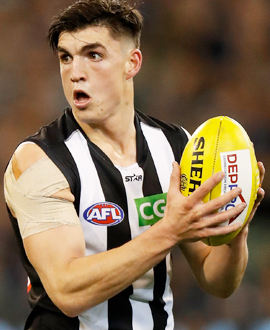 Renowned for his powerful and polished left foot, Maynard’s skills from half back are an asset. He has excellent vision and great agility. He is a smart player and, despite not being blessed with superb endurance at the start of his career, runs to the right spots. After impressive VFL form, Maynard’s persistence led to his AFL debut against Hawthorn in round 14.

He shared a debutant’s attention with fellow first-year Magpie Darcy Moore, but arguably stole the spotlight in a game that saw him collect 11 disposals and six tackles.

Maynard’s form continued to improve as he grew in confidence with exposure to the speed of senior football.

He recorded a career-high 18 disposals against Port Adelaide in round 15, a game which saw him play for the first time in the state where his father was an SANFL champion.

The 19-year-old replicated the feat against Carlton, but also added his first of two AFL goals for the season.

While flashy goals or high-flying marks usually fill the highlights reel, Maynard’s courage and ability to attack the ball with no fear for his personal safety is what stood out during the back half of his debut season.