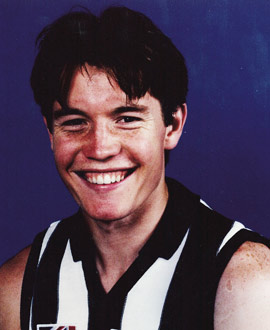 One of the original 10 concession picks for Adelaide he played just six games in two seasons after coming from Sturt and admitted later that he wasn’t ready physically or mentally.

Sanderson reflected later that as an 18 year-old he was unable to handle the “movie-star” hype that surrounded Crows players.

He reckoned that sharing a house with Nathan Buckley when with Collingwood made him an improved player as he saw the level of dedication needed to make it.

Two bad hamstring tears ruined his year at Collingwood and he was traded at the end of 1994 to Geelong.

He was dropped from the team for the 1995 Grand Final to make way for the return of Grant Tanner. In 1996 he established a regular place in the Cats’ side as a half-back flanker who liked to run out of defence and over time was given the most demanding of roles on menacing players such as Jeff Farmer.

He went from strength to strength and reached the pinnacle when he won the club best and fairest in 2001 after having been a place-getter the previous two seasons. The Geelong stalwart had a frustrating season in 2002 when he was plagued by injuries.

Firstly a calf, then an ankle strain which put him out for three weeks. On his return he injured the ankle again and missed another five weeks. He was back in form in 2003 and ran third in the best and fairest.

2004 was a solid if unspectacular year for him, and it ended on a low note when a heart condition was diagnosed during the finals.

He was appointed as Adelaide coach for the 2012 season and remained in the post until the end of the 2014 campaign.