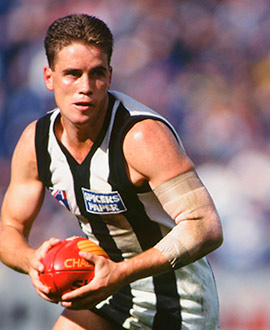 An onballer from country South Australia who was recruited to Collingwood via Norwood.

James spent much of his career with the Magpies as a bench-warmer but put in some useful games, kicking three goals in two of his first six senior games in 1994.

Adelaide picked him up to add depth to its list and he celebrated his return to his home state by being part of the 1997 premiership side. He achieved the unusual distinction of playing in two premiership sides within a week as he was also part of the Norwood team that won the 1997 SANFL flag.

James then developed into an invaluable player for the Crows and also was a member of the 1998 premiership side.

He was surprisingly cut from their senior list at the end of Gary Ayres’ first season at West Lakes. His brother, Roger, was a member of Port Adelaide’s premiership side in 2004.