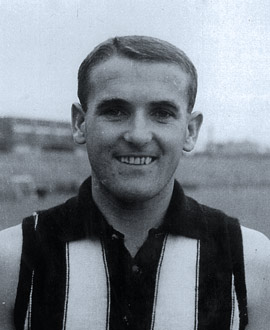 When Collingwood took a trip to Tasmania to play a game against a combined Northern Tasmanian Football Association side at the end of the 1956 season, it seemed like a bit of fun after an arduous year and a second successive grand final loss.

But the Magpies decided to make the most of the trip.

On board the ANA Skymaster flight to Launceston was a 17-year-old schoolboy who hadn’t even played for our under-19s yet – a young rover who was turning heads with his pace, skills and goalkicking nous for Parade College.

Just two years later, Brian Beers would be one of a handful of youngsters who would help deliver the club its greatest Premiership and one of the biggest upsets in VFL/AFL Grand Final history.

Brian was always going to play for Collingwood: his family background all but demanded it.

His grandfather, Tom Bird, had been involved with Britannia and was an influential figure around Collingwood for the first 20 years of its history. One of Tom’s brothers, Bob, played a single game for the club in 1898. Two of Tom’s children, Leo and Tommy Jnr, both played as talented rovers with the Magpies in the Machine team era, and Tommy would spend 30 years as the curator at Victoria Park, living in a cottage on the corner of Lulie St and Trennery Crescent. Another son, Les, played with the seconds.

One of Tom Snr’s daughters, May, gave birth to Kevin Wylie, who played 12 games in the mid-1950s. Another daughter, Ellen, would marry Eddie Beers – himself a handy footballer with Coburg and Abbotsford who tried out with Collingwood – and produced Brian.

Before long, Brian was showing the same sorts of footballing traits as his forebears. He played with St Thomas’s CBC under-14 side on Saturday mornings and with the senior school side in the afternoons. He once kicked 100 goals in a season as a junior while at full-forward.

Magpie recruiters saw him starring with Parade College in 1956, prompting their invitation for the Tasmanian trip. They liked what they saw there too, and offered him the chance to train in 1957. He appeared for the third of four intraclub games, and the Pies were already excited: “The appearance of Brian Beers, 17-year-old rover who performed so well in the after-season match in Launceston … will be watched with keen interest, as [he] has the ability to earn quick promotion to senior football,” said the club’s programme from that game.

He did well in those two games and seemed odds-on to be added to the list. But Ellen intervened, insisting that he finish his schooling before embarking on a VFL career. Brian’s Collingwood dreams would have to wait.

Instead he captained Parade to a Catholic Colleges Premiership, and continued to develop his highly promising tennis game (he was runner-up in the Victorian hardcourt championships that year), which would eventually force him to choose between the two sports.

Luckily he chose footy as his priority (although he continued to play tennis regularly), and by 1958 – his schooling complete – he was able to make his way to Victoria Park.

After just a few games in the reserves, he was named as second rover/forward pocket (replacing the injured Errol Hutchesson) against Essendon at Windy Hill. He did OK that day, then kicked three in each of his next two games, against Carlton and Richmond, to really make people sit up and take notice.

“This fellow is one to watch,” wrote The Sun. “Clever ball-handling and a knack of slipping into the open ground to take pot shots – mostly on target – are his best assets. Makes the most of the opportunities he creates with long, straight kicks. Notice how well he uses the ball, dropping passes at just the spot for a teammate to take them without losing stride.”

Brian’s early form didn’t last, and he was sent back to the seconds for a few games, then found himself in and out of the side during the rest of 1958. But on one of those returns he was shifted from roving to half-forward flank – and that turned out to be a key move.

After the team was thumped by Melbourne in the second semi-final, selectors opted for a raft of positional changes and also brought back a handful of youngsters, including Brian. He did well enough in the preliminary final win over North to keep his spot, before adding two vital goals in the low-scoring win against the Demons on Grand Final day. After just 10 games, he was a Premiership player.

By midway through 1959, The Sun branded him “as good as any half-forward flanker in the League – and getting better every game”. He kicked 28 goals that year, and 25 the next. He struggled with both injury and form in 1961, but it was a bleak year for the team – especially tough for anyone playing in ‘starvation corner’ – and he still managed bags of six and five while on duty with the seconds. He had every reason to hope that 1962 would be better.

Instead he was part of a brutal Magpie purge that saw no fewer than 17 senior players dropped from the list. He survived the initial cull at the end of 1961, only to be made vice-captain of the reserves for 1962 – never a good sign. He played the early matches with the seconds but, with no return to seniors on the cards, crossed to Fitzroy midway through the year (he would spend three seasons and play a further 19 games with the Lions). But he’d never wanted to leave Victoria Park in the first place.

Once Brian had decided to retire from VFL/AFL football, tennis resumed its place in his life and he again played at a high level before heading into the game’s administration. In a lifetime of service to the game he would go on to become the general manager of Tennis Victoria and WA Tennis at different times, as well as serving on the management committee of the Australian Open, and with Tennis Australia’s player development board under John Newcombe. He was also a tennis commentator with 3AW for the Australian Open for 40 years

But the links with Collingwood never disappeared, and were only strengthened when two of his sons, Tony and Mark, both played with the club in the 1980s, completing that staggering family history

As we know, that’s a history which stretches back all the way to 1898 and covers a no fewer than seven family members who played senior football with the Pies (just eclipsing the famous Pannams/Richards with six, although they also now have Ed Richards at the Bulldogs to make it seven in total). The 60 games he played with us places Brian at the top of his own personal family tree, and his average of better than a goal a game across that period remains impressive for a half-forward who was still finding his way in the game. Even today it still seems a harsh move for the club to have dropped him so early. Luckily it didn’t dilute his long-term love for the club, one which has seen him retain a lifelong involvement, including with the Past Players Association.

With all he’s given to the club, the Bird/Beers/Wylie lineage could not have had a better standard-bearer than Brian Beers.