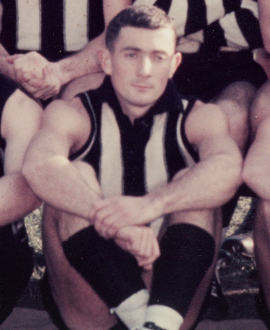 There aren’t many Collingwood footballers who can say they’ve played footy at the Olympics.

But Brian Gray can.

He was one of three Magpies, alongside Ken Turner and Ray Gabelich, who played for a combined VFL/VFA team in an exhibition game of Australian football at the 1956 Melbourne Olympics. That game, against a combined side from the Victorian Amateur Football Association, was intended to showcase Australian football to the world.

Remarkable, then, that Brian should have been chosen to play in such an auspicious game at the end of only his firstseason in League football. That speaks volumes for the brilliance of his play and the impact he made early in what turned out to be a fine career.

Brian was born in Yea but grew up in Coleraine. He went to school at Marist Brothers College in Mt Gambier and was, in those days, more interested in SANFL footy than he was in the VFL. West Torrens was the team he barracked for, and they began to show plenty of interest in him after he won three successive competition best & fairests for his local team. The Eagles even flew him to Adelaide to watch the 1953 SANFL Grand Final.

But the Magpies had a secret weapon. By this stage Brian had left school and started work in Coleraine with the State Savings Bank. The National Hotel there was owned and run by the former Magpie champion and Machine team legend Jack Beveridge. He and Brian became friends, and Jack pointed him away from West Torrens and towards Victoria Park.

By this stage Brian had become a seriously good young footballer. As a 17-year-old he starred in the centre for Coleraine’s 1955 Premiership side. Alongside him was a good friend called Les Kaine, who was the club’s leading goalkicker that year. The two mates ventured to Melbourne together early in 1956, Kaine having been approached by Hawthorn and Gray following Jack Beveridge’s advice to Victoria Park.

Brian’s impact during the 1956 pre-season couldn’t have been more dramatic. Champion Preston centreman Les Sweet was another trying out that year, and the selectors pitted the two against each other in the first couple of intraclub games. Brian beat him so comprehensively that Sweet promptly abandoned plans for a VFL career (and went back to win Preston’s best and fairest that year). The next week they put him up against Bob Greve, who had made his senior debut the previous year, and he outpointed him too (after which a club report noted that “his position play and disposal of the ball are a delight to watch”). He then broke even against Bill Twomey.

The Pies then played a ‘proper’ practice match against Hawthorn, and Brian was close to best on ground – and clearly the best newcomer on display. “He looks to have great possibilities,” wrote The Argus. “He has a really bright football future.”

And so it proved to be.

After such a stellar series of practice match performances, it surprised nobody when Brian was named on the half-forward flank against Hawthorn in the opening round of the 1956 season (with his Coleraine mate Les Kaine debuting for the Hawks). He kicked two goals and did well, then kicked a goal in each of the next three games as well. He was moved into the centre for his fifth game but struggled and was sent back to the seconds for more grounding.

After that first season he quickly became a regular senior player once injuries allowed – most often on the wing, but also spending time roving or on the half-forward flank. He was a smooth-moving, quick runner who could cover the ground better than most. He was a fine ball-handler, a reliable user of the ball and a good mark for his size. The Sun described him as a “slippery little speedster” who also loved to fly for the occasional high mark. “There’s nothing showy about his work but he wins the ball well in the air and on the ground,” the newspaper said. “He gets results with dash, sure handling of the ball and sensible long kicking.” Footy Fan magazine said his trademarks were “clever positional play, good marking and fast breakaways followed by accurate disposal.”

He was also unbelievably fit. Indeed, at a time when there were no full-time footballers and every player in the VFL had a ‘regular’ job, Brian Gray was way ahead of his time in the area of fitness. He neither drank nor smoked, and was referred to in some circles as “Mr Fitness”. As well as the regular club training sessions he worked out four nights a week at a city gymnasium and then added track sprints at a park near his house. This ability to run – and keep running – gave him a huge advantage over his rivals. But he also got stronger through his gym work, and that combination of speed and strength was a heady mix.

He played on a wing in the 1958 Premiership, and by the turn of the decade was regarded as one of the most accomplished wingmen in the VFL. He finished third in the Copeland in 1960 and second in 1962, a year in which he finished sixth in the Brownlow voting. He also played for Victoria in both ’61 and ’62.

Sadly he was dogged by injuries from then on. In the eighth game of the 1963 season he strained an Achilles tendon and also chipped an ankle bone, missing most of the rest of the year. He returned in 1964 but then was hit by persistent thigh muscle problems and played only six games. At the end of that year he was appointed playing coach of Horsham in the Wimmera League, but decided to he wanted to qualify for Life Membership at Collingwood so stayed at Victoria Park. True to form he was a useful contributor that year, playing 10 more senior games in a team that made it to a preliminary final. He then coached McKinnon in the Federal League and later coached Melbourne under-19s for five years, including a flag in 1971. He then spent many years helping out local juniors around his home in Aspendale.

Brian Gray was as quiet and unassuming as they come as a player. He didn’t seek out the limelight or attract huge amounts of media attention. But he just kept running, kept getting kicks and kept contributing to his team, in 111 games across 10 seasons. That’s a fine epitaph for any footballer at the end of his career.