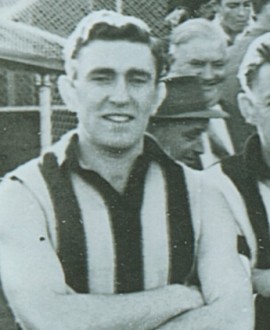 Seven seasons for 38 senior games doesn’t sound like much of a return for a top level footballer. But those bald statistics bely a deeper story, revealing a player whose career was blighted by injury, and who was so promising that the club kept him around for much longer than many others – simply in the hope that he would one day be able to fulfil his undoubted potential.

That is the real story of Brian Turner’s ill-fated League career.

Brian was born in North Carlton, then moved to Northcote, where he lived in the same street opposite the Coventry brothers. He barracked for Collingwood from the start, idolising the stars of the 1940s. He went to school at Parade Christian Brothers College and played junior footy with Alphington YCW before taking up with Old Paradians, where he was part of a B Grade amateur premiership team in 1951.

The Magpies obviously liked what they saw of him that year, because they invited him down to training for the 1952 pre-season. He starred at centre half-forward in his first practice match and remarkably found himself named in the same position in the seniors for the opening match of the season the next week, against Hawthorn at Glenferrie. It was a meteoric rise, to say the least.

After his debut, The Age wrote: “Brian Turner, centre half-forward, is a good mark, and, as he fits in with the Magpies’ style of play, could be the player Collingwood has been seeking for years.”

Brian held his spot for the first seven weeks of the season, no mean feat in such a difficult position. He was then returned to the seconds where he injured his ankle, forcing him to the sidelines for a handful of weeks. He was still finding his feet again when the senior selectors stunned the football world by once again naming at centre half-forward for the second semi against Geelong, despite not having played with the seniors for 12 weeks.

It was a bold move, but it didn’t ultimately work: Brian had a disappointing game and missed out on the rest of the finals campaign. But his selection had underlined the selectors’ faith in him as a long-term option for a key position.

And no wonder. He was strongly built and an excellent mark, but also extremely mobile for his size. His kicking wasn’t his strongest suit (one harsh critic described it as ‘indifferent’). In the years ahead he would find himself increasingly played in defence, making him a valuable ‘swingman’ type option. He also took regular stints in the ruck, where his high leaping was a useful weapon.

But the next few years were filled with frustrations. He missed almost all of the 1953 season with a mystery back complaint that threatened his entire career, only returning for some reserves games late in the year, and was regularly troubled with niggling injuries thereafter. When he returned in 1954 he played a brilliant practice match, then injured his thigh again and missed weeks. It was to be a recurring theme.

His ill-fortune was highlighted in a ditty in a club newsletter published in 1955:

“Brian Turner, a young follower, having bad luck.
Lacks nothing essential – especially not pluck.
With his brilliant marking and general good play.
For his rovers to win matches, he helps pave the way.”

But any hopes of a mid-career renaissance were dashed when he could crack even a single senior game in 1958 – his seventh season on the senior list. The Magpies finally accepted that Brian was not going to be the answer, and cleared him to North Melbourne, where he played a further 43 games across three seasons – a much healthier return, and much more reflective of his capacities.

After he left Arden Street he went into coaching, with Edithvale Aspendale. He was an insurance manager (who once counted a young Denis Pagan among his clerks). A quiet and religious man, he might have seemed ill-suited to the knockabout atmosphere of football clubs, but he managed to form lifelong friendships with many of his Magpie and Kangaroo teammates.

In the end Brian Turner managed 81 senior games across both clubs. That’s a fine return, but it almost certainly would have been far more had it not been for his injury issues.