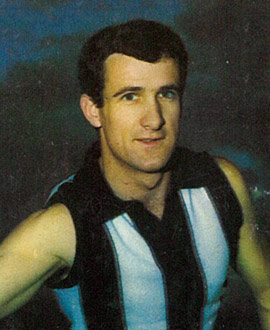 The Collingwood teams of the late 1960s and early 1970s were dotted with some of the biggest names and most talented players in the club’s history.

But those teams still owed much of their success to the contributions of the ‘quiet achievers’ – the players who didn’t command the headlines of their more famous teammates but who played vital roles week-in, week-out, with great effectiveness and relatively little fanfare.

Brian McKenzie was a perfect example of just this sort of player.

He joined the Pies from Terang in 1966, and over the next seven years became an integral part of the understated, yet often brilliant, Collingwood defence, his attacking forays and raking drop kicks becoming a regular feature across 81 senior games.

Brian and his family were mad Magpies, and it was that passion that helped lead him into a Collingwood guernsey in the first place. Many VFL clubs beat a path to the McKenzie family dairy farm at Ecklin, just south of Terang, in the mid-1960s. Brian had been a standout performer at Monivae College in Hamilton, winning the first eighteen’s B&F, but it was his performances in the centre and at centre half-forward for Terang seniors, and with the Hampden League representative side, in 1965 that really sparked VFL recruiters’ interest. Ron Barassi and Carlton visited, as did Richmond and others. Fitzroy promised him a spot in the centre the very next week. St Kilda promised him a Holden car. But when the Magpies came calling, there was only ever going to be one outcome.

McKenzie spent most of 1966 in the seconds, playing in the centre, at half-forward and across half-back. He broke through for his first senior game against Fitzroy in Round 13, but was named on the bench and only came on the last quarter to replace Kevin Rose.

By 1967, however, he became a regular, playing 14 games in the back pocket and on the half-back flank. With the exception of a 1968 season blighted by a knee injury, they were positions he would call his own across five seasons.

McKenzie was blessed with good skills and decent pace, and loved running off half-back. He wasn’t a flamboyant player but nor was he a dour stopper: rather, he was an attack-minded defender who loved nothing better than clearing his lines with the long, raking drop kicks that became something of a trademark (indeed, while coach Bobby Rose wasn’t a fan of the drop kick, he was prepared to make an exception in Brian’s case – “No drop kicks – except for Macca!”).

The Football Record in 1969 described him as a “courageous defender with plenty of talent”. The Sun in 1971 said: “Looks, thinks and acts like a natural born half-back. No matter how big the opposition or how hot the situation, goes relentlessly after the ball. Usually manages to finish off his clearing dashes with long, well placed kicks.”

By 1970 he was entrenched across half-back and had developed a wonderful understanding with the great Ted Potter at centre half-back and Lee Adamson on the other flank. But in Round 20 that year, against Essendon, he tore his hamstring and missed the rest of the season, including the infamous Grand Final defeat to Carlton. McKenzie felt he was right to go for that game but the selectors weren’t willing to risk his return after missing five weeks of football. It was a decision that hurt.

He returned with a top 10 Copeland finish in 1971, but when Bob Rose left at the end of that year to coach Footscray, he asked Brian to go with him. The Magpies refused his clearance, though, and with new coach Neil Mann looking to restructure his defence, McKenzie took up the chance to pursue a Project Management job in Deniliquin. And with that a fine career dwindled to a conclusion that was less than it deserved, with only one mid-season game coming in his final year of 1972.

Brian went on to coach at Turvey Park in Wagga Wagga, followed by coaching stints back in Melbourne with the South Melbourne under-19s (when Des Tuddenham was coaching the seniors). He also spent time as an assistant coach with Prahran in the VFA. In the early 1980s he returned to Victoria Park as part of Ranald Macdonald’s New Magpies, serving on the Board and also on the match committee.

Brian McKenzie served Collingwood well both on and off the field, and was an important part of some of the finest Magpie teams of all time. We should all be glad that he turned down St Kilda’s offer of a brand new Holden way back in 1965.