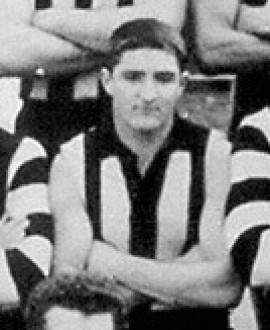 Brian Renwood showed more patience than most in his journey to the senior Collingwood side – but his ‘reward’ was one of the more frustrating three-game careers on record.

He arrived at Victoria Park as a 17-year-old in 1953, having played with Abbotsford in 1952 and local Collingwood club Palmer Rovers before that. He enjoyed a solid first season with the under-19s, playing 15 games. But he took giant strides in 1954, finishing third in the club best-and-fairest and second in the Morrish Medal count for best player amongst all League clubs, from just 11 games. He also managed a handful of games in the reserves.

All seemed to be tracking nicely towards further progress. But he managed only nine reserves games in an injury-hit 1955, during which he also turned out for the Magpie Football Club in the Sunday Amateur Football League, and then left to go back to his home club of Abbotsford. The Magpies, however, weren’t giving up, and coaxed him back for another crack in 1957.

He arrived for the second practice match, and dominated the early game so comprehensively at centre half-back that he was called into service in the senior match as well when Brian Turner became unavailable. He also performed well there, up against no less a figure than Murray Weideman, and kept his place for the rest of the seniors practice matches, playing either at centre half-back or on a half-back flank (where he was better suited).

His rapid return to prominence was complete when he was named in the senior side for just the second round of the season, against South Melbourne. But this is where the frustrations started. He was named on the bench that day and didn’t get on the field. He was dropped to emergency the following week, but was called into ‘action’ when Bill Serong was a late withdrawal. Again he sat on the bench all day without getting a run. He kept his spot on the bench against North Melbourne the following week, and this time at least got on the ground, replacing Ray Gabelich in the third quarter when Gabbo broke his leg. Remarkably, despite the brief appearance, he did enough to feature in two newspaper action photos, one leaping for a mark and the other in general play.

But that was it. Brian was dropped the following week and spend the rest of the season with the reserves. So after finally getting his break some four years after arriving at the club, Brian’s senior career amounted to roughly 45 minutes of football (although he did get to play with the senior team again during a mid-season trip to Hamilton).

You could have understood it if he’d been frustrated. But those experiences did nothing to dent Brian’s love for the Collingwood Football Club. He would go on to play a major role with the Past Players, being actively involved for many years and also spending a long stint on the committee. Widely known as ‘Tich’, he was a constant and formidable presence at Past Player functions. He was also an ‘early adopter’ of a Magpie tattoo.

He was appointed captain-coach of Tooronga Football Club in 1958, and played with Camberwell in 1963. By 1969 he was playing coach with Oakleigh District reserves. A fireman by profession and a loveable larrikin by nature, he came into the news again in 2005, when he was quoted in some media outlets while attending a memorial service for the 2002 Bali bombings (he loved the place and had visited many times).

After a senior career that amounted to less than an hour of playing time, Brian Renwood repaid Collingwood many times over in the years that followed, through his lifelong connection to the club and his commitment to the Past Players.