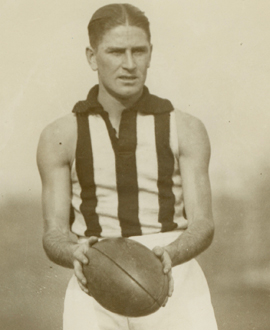 Over the years, names as famous as Ted Whitten and Ron Barassi have laid claim to being ‘Mr Football’. But Collingwood has its own claimant to the title – and it’s not Jock McHale, or Lou Richards or any of the other best-known former Magpie champs.

Rather, the ‘Mr Football’ tag would sit most appropriately with former winger Bruce Andrew. Not so much for what he achieved as a player – though two Premierships and 62 games in the strongest Magpie teams of all time is nothing to be sneezed at – but for what he did for the game in general.

It’s fair to say that nobody in the history of the game has done more to promote Australian football than Bruce Andrew. He took it to country towns around Victoria, pioneering interstate forays into NSW and Queensland and even internationally into Papua New Guinea. He used books, newspapers, town hall lectures illustrated with coloured lantern slides, radio, newsreel film specials and, later, television to spread the word as far and wide as he could, with a fervor that bordered on the evangelical. He devoted his life to this cause, and broke new ground with almost every avenue he tried.

But if Bruce was Collingwood’s ‘Mr Football’ then his senior career could hardly have started with less fanfare. He was only told about his debut in 1928 by a tailor ringing him at work on a Friday to ask his measurements for a new pair of shorts he would need the next day. Bruce was initially confused, and it was only when the tailor insisted on making white shorts rather than black that he realised he must be in the seniors rather than the seconds.

But the lack of ceremony didn’t end there. It was the tailor who told him to go to Victoria Park that night and pick up his jumper. But the jumper had no number, and Bruce had to get his mum to sew on the No. 27 that night. Then he had to go to George Connor’s estate agency to pick up an entry ticket. But the next day, after taking a cable tram to Fitzroy, the surly gate attendant didn’t recognise him and at first wouldn’t let him in to the Brunswick Street ground.

Luckily things got a little easier for Bruce from that time on, and nine weeks and nine games later he was part of a Collingwood Premiership team.

It had been a meteoric – and slightly bizarre – rise for the Abbotsford youngster. He’d been a gun full-forward for Abbotsford who topped the ton in 1926, and was making a name for himself up forward with Collingwood Districts (including a bag of 10 against St Kilda) when he was unexpectedly given his senior debut – on a wing! Jock McHale had asked seconds coach Hugh Thomas to send up his fastest player, and Bruce Andrew fitted the bill. So even though he’d never played there before, his first game for Collingwood came on a wing.

Remarkably, he settled into the role easily. Indeed, as things turned out, he was ideally suited to wing play. He was one of the speediest players of his day and loved haring down the open spaces on the flanks. He also had terrific evasive skills and could duck, turn and weave to get himself out of tight spots. Andrew later admitted that his was a game based almost exclusively on his blistering breakaway pace. He had a slim build and was not physically strong, nor was he renowned for his marking. He’d mostly used punt kicks when shooting for goal, but McHale insisted on stab kicks from his midfielders, so Andrew worked with Billy Libbis and Harry Collier and soon became one of the finest kicks in the game.

After the 1928 Premiership win, Collingwood celebrated in style with a picnic on the Mornington Peninsula. While diving into shallow water at the baths there Bruce fractured his neck – apparently finishing a promising football career. But he stunned everyone by returning to running with his neck in a brace after just a couple of months in hospital, and even more remarkably was back in the team for the opening game of the 1929 season.

Further injuries ruined the rest of 1929, but he was back for the 1930 Premiership. He retired after the 1932 season, became a vice-president of Collingwood in 1933, and when he returned to the seniors for the last few games of 1934 achieved the rare distinction of being a playing vice-president. He gave up senior football after that but continued to train, taking the field for the seconds from time to time.

This was when Bruce really turned his attention to the wider world of football. He was the editor and publisher of some of the earliest known text books on the game, and directed and produced educational films as early as 1936. He spent an enormous amount of time lecturing junior players, using enlarged pictures of champion players in action to illustrate points and impress the youngsters (he was working at the Herald and Weekly Times and was able to call on many of the print giant’s resources to help him). The lectures were a big hit, and drew praise from numerous football commentators. Later he developed the idea even further and added coloured lantern slides to his box of promotional tricks. Eventually he took his show on the road, presenting his magnificently illustrated lectures at football clubs and in public halls throughout Victoria and into Tasmania.

He also played a key role in giving young footballers a chance to strut their stuff before the main games at Victoria Park, replacing the baseball curtain-raisers with a series of schoolboy football matches. Andrew helped organise and run this competition, which was a feature of Victoria Park match days for some 20 years and which produced a number of senior Collingwood footballers (including Des Fothergill).

Almost inevitably, he ended up with the Australian National Football Council, spending 27 years as their secretary/field director, promoting football to many previously neglected areas in Queensland, New South Wales, the A.C.T and New Guinea. He continued to spread the word during the Second World War (he initially acted as an HWT war correspondent and then flew Spitfires with the RAAF), organising games of Australian football to be played in London for Australian servicemen. He also arranged games of rugby and cricket: he was a gun fast bowler himself and ended up playing alongside Keith Miller at Lord’s in one of the services games.

His media career really took off when he returned to Australia. He wrote for The Sporting Globe and other papers, broadcast games for 3DB and served as a member of the World of Sport panel, where he is fondly remembered as a stern-faced judge on the Champion Kick segment.

But his real driver was the continued promotion of Australian football, especially through the ANFC. He was the force behind so many initiatives, including the production of coaching and junior support resources, as well as the regular hosting of the football carnivals involving all states. He helped start the Teal Cup, and the Junior Football Council would later name the medal given to Victoria’s best player after him. So great was his all-round contribution to football that he was awarded an MBE.

Bruce Andrew was a pioneering giant of our game, and the impact of his work continues to be felt today. As former St Kilda great Neil Roberts wrote in 1974, when Bruce finally stepped down from the ANFC: “There is something sort of sacred about this friendly, self-made man. He’s earned a reverence in football that will never be matched. There will never be another Bruce Andrew – because pioneering can be done but once.”