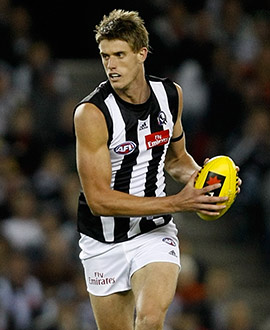 A tall, lean ruckman who provided able back up to Josh Fraser and Darren Jolly during Collingwood’s the end of Mick Malthouse’s time as coach.

Although he never quite nailed down a regular place in the senior line up, Wood’s athleticism and good character ensured three clubs gave him an opportunity at the highest level.

Wood arrived at Collingwood via a trade with Brisbane that saw selection No. 14 (Jack Grimes) go north.

He was earmarked for senior opportunities from the get-go, performing solidly early in 2008 before dipping out of the side after round eight.

The South Australian settled into the side towards the back end of 2009, recording 24 disposals, 19 hitouts and two goals against the Crows on his home patch in round 19.

Wood played in two of Collingwood’s three finals and was solid in the Semi-Final win over Adelaide.

Opportunities were limited in the premiership year of 2010, playing a cluster of four games from round seven to 10 but remaining in the VFL from thereafter.

As Jolly’s body began to falter and with Fraser now on the Gold Coast, Wood was given an extended run in the seniors in 2011, playing 12 games and kicking three goals against Fremantle in round 23.

But after the heavy loss to Geelong in round 24, Wood made way for Jolly who returned for September.

He was again a bit-player in 2012, bobbing up at different stages of the season as Jolly was sent to rest.

Wood’s best match of the season came against the Suns when he won 23 disposals, 25 hitouts and kicked a goal in round 10. Yet he played just two more games, his final outing coming against the fearsome West Coast combination of Dean Cox and Nic Naitanui at Subiaco Oval in round 22.

Wood was delisted at the end of the season and trialled with Richmond but missed the boat in the pre-season draft.

A successful year in the VFL with Williamstown ensued, and he bobbed up yet again in 2014 when Carlton – now coached by Malthouse – gave him a third chance.

He debuted late in the season and didn’t let his coach down, producing some of the best football of his career.