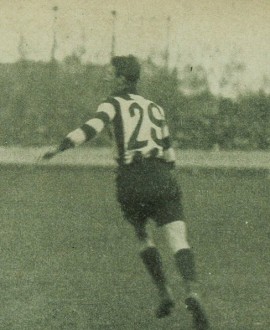 Collingwood named seven debutants for the Round 1 clash against Richmond in 1922.

One of them would go on to become the greatest captain in the club’s history, leading a team that would win four consecutive premierships. His name was Syd Coventry, while another of the debutants that day, Leo Wescott, would become a member of the famed ‘Machine’.

Charles Wall was another first-gamer that day. But unlike Coventry and Wescott, this would be his one shot at playing for Collingwood.

Yet regardless of that short-lived time in black and white, this 26-year-old defender recruited from Ivanhoe had already served in a much more important theatre than what he experienced at Punt Rd that day.

Before representing Collingwood, Wall had represented Australia. He was initially knocked back from enlisting to fight in the First World War on account of the state of his teeth. But he would not take no for an answer and was eventually allowed to join the 9th Reinforcements of the 8th Light Horse Regiment on August 9, 1915.

As a blacksmith, he was ideally suited, and he would come to play an important role in shoeing and looking after the horse at various stage of the war, in Egypt.

He was less than two months beyond his 20th birthday when he came into camp, and sailed away on the Hororata on September 27, 1915.

Exactly one year on from his enlistment, Wall would be wounded and diagnosed with shell shock, which took him out of the line for a period of time as he sought to make a recovery.

He would reach the rank of Corporal, serving in the 4th Machine Gun Squadron for a time, before returning home to Australia in the middle of 1919, long after the Armistice was signed.

Wall would play his football in the post-war years with Ivanhoe, which neighboured with the town in which he had been born, Heidelberg, and he came under the attention of Collingwood in that time.

By 1922, he got his chance to train with the Magpies, and impressed Jock McHale enough to be given his chance as the coach tried to build a side capable of sustainable success.

McHale would succeed in doing so, but Wall would not be a part of it.

The Argus reported: “Back men trying to catch the eye of the (Collingwood) judges (included) Wall, of Ivanhoe.” Wall caught their eye enough to win his first game, but he could not convince them to give him another chance, and by the middle of the season he was back with Ivanhoe. Later that year the local paper noted his importance, saying: “Wall proved himself a fine player”.