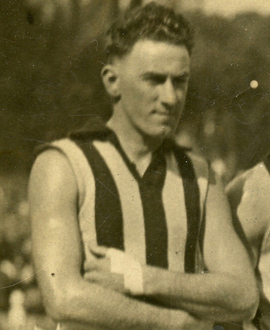 When Charlie Ahern crossed to Collingwood from Northcote in 1929, he and his family were already sadly familiar with tragedy. Two of Charlie’s seven siblings had died by the time he was into his teens, one a victim of war, the other of childhood illness. Charlie’s rise to football’s elite level gave the family something to celebrate, but they could not have known then that further tragedies lay just around the corner – and that the strapping, strong footballer would himself be one of the casualties.

The story of Charles David Ahern is one of the saddest in football history. He was born in Northcote in 1905, the youngest of eight children to Timothy and Minnie Ahern (the latter owned the Robbie Burns Hotel in Smith Street for a while). Charlie became a boot worker at Whybrows and each morning he’d ride to work and leave his bike at a house owned by the company, where some of its employees lived. One of those employees was a young English girl named Evelyn Smith, who in 1928 became Charlie’s wife (an event that in itself caused a stir, because Charlie was a Catholic and Evelyn was not).

Charlie was of solid Irish stock and had a touch of the famed Irish temper about him. He was strong, wiry and tough, standing 180cm and weighing 79kg. “He could fight like a threshing machine”, recalled Evelyn many years later. “He was a good man, but he was rough on the field.”

That strength and aggression were the characteristics that defined his football. Former teammate Len Murphy recalled a player who wasn’t overly skilled, but was “as tough as they come”. Ahern played mainly as a follower or defender, positions in which courage, physical strength and a willingness to continually put one’s body on the line were essential prerequisites. He had them all in spades.

After leaving school, Charlie played football with Northcote (he even won a set of cufflinks there one year, for his consistent play) before being invited to join the Collingwood seconds in 1928. Seconds coach Hugh Thomas was a big fan, especially because of Charlie’s willingness to “put his fists up” in defence of his teammates.

It was Thomas’s advocacy that brought Charlie his greatest – and last – moment in football. He’d been placed on Collingwood’s senior list in 1929 and played two senior games without making much of an impact. But when the Pies were out-muscled by Richmond in the semi-final and Jock McHale decided he needed some additional brawn to help protect Syd Coventry, Thomas recommended Ahern in a flash.

Ahern played heroically on Grand Final day, copping a barrage of bumps and knees and thumps (as well as dishing out a few himself) while protecting Syd Coventry and playing a crucial role in the team’s Premiership victory. In the rooms after the game Coventry himself singled out Ahern’s performance above all others.

Sadly, Charlie Ahern’s biggest moment was also the start of 18 months of hell. It has long been believed that he suffered a broken arm during the game, the arm became infected and he died early the following year. But that is not correct. It is thought that he suffered a greenstick fracture of his arm, along with some internal injuries, during the match. He was taken to hospital, but his wife recalls him still being well enough to play the piano at the Premiership celebrations that night. Soon afterwards, however, he became ill and had to be convinced (by Harry Collier) to join the team on the trip to Tasmania.

His illness continued to worsen in the weeks and months that followed, and by early the following year he was described in the press as “a very sick man”. Collingwood arranged a benefit dance for him that raised 63 pounds. But Charlie grew weaker and sicker and his family felt they were watching him fade away. He eventually succumbed at the Austin Hospital in April of 1931, 18 months after the Grand Final. The official causes of death were “carcinoma of the rectum” and “exhaustion”. Charlie Ahern had died of cancer: he was just 25.

His parents and siblings could scarcely believe their misfortune. The oldest Ahern child, Timothy Jnr, was a champion swimmer who served as a lieutenant with the 54th Battalion of the Australian Infantry. He died in France in 1916, aged just 22. A daughter, Mollie, died of measles at age 14 and another daughter, Arlene, followed Charlie as a cancer victim at age 43. The loss of Charlie was almost too much to bear, and various family members for years blamed certain Richmond players, and the pummelling they subjected Ahern to on Grand Final day, for his death.

The Collingwood players responded in the only way they knew how – by trying to help his family. Charlie’s brother Joe was a tailor who lost his job in the Depression around the time of Charlie’s death. The players, led by the Colliers and the Murphys, developed a “suit club” where they and their friends would regularly contribute a small amount to a “pot” and would wind up with a “free” suit each year. In reality, it was simply an elaborate way of helping support Charlie’s brother through the toughest of times.

Charlie Ahern wasn’t a champion footballer. He was an honest, hard-working player who made the most of his abilities and played a huge role in one of this club’s most famous Premiership victories. But that must have been scant consolation to a family that had already known too much heartbreak, and the young widow who was left to grieve.