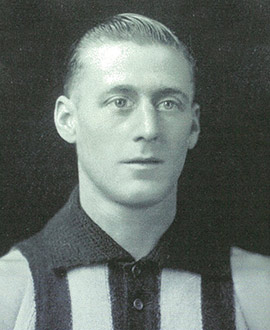 Charlie Dibbs must be one of the most underrated players ever to pull on a Collingwood guernsey. He played more than 200 games in a career that spanned 12 seasons, represented Victoria and held down the full-back post in six grand final sides — five of which turned out to be Premiership combinations. Yet his name is only rarely mentioned when people talk about the secrets of Collingwood’s success in the 1920s and 1930s.

That is partly a legacy of the way Dibbs went about his job. Like Harry Saunders, his immediate predecessor in the full-back position, Dibbs was a no-fuss, no-frills player. He played it close, tight and hard and preferred to spoil rather than go for the glorious high marks for which his successor, Jack Regan was to become renowned.

Although only 175cm tall (5ft 9in) and of slight build, he had a good leap and was a fine mark himself. But he saw his role first and foremost in defensive terms. He usually preferred to spoil the full-forward and then contest for the spilled ball. Once the ball did hit the ground he had an advantage over most full forwards because of the pace that came with his lack of inches. With his magnificent kicking, which was possibly the standout feature of his game, Dibbs soon came to be regarded as one of the best full-backs in the game.

And that is not bad for a bloke who came to the club as a rover!

Charlie Dibbs was born Charlie Heaton, but his father died at a very young age. When his mother remarried, young Charlie took on his step-father’s surname. He first showed a liking for football while at Rathdowne Street State School, and he played with both Abbotsford in the YMCA competition and the Stanton St church football team before he joined Collingwood in 1924. In all his junior football he had played as a rover/forward. It was that position he filled in his first game for Collingwood, against Melbourne in the third round of 1924. At half-time he was swung to full-back to help out in the absence of the injured Saunders.

No one is quite sure what possessed the Collingwood brains trust to shift a 5ft 9in rover to full-back, but it worked. Dibbs once said that he had “never in his wildest dreams” thought he would turn out to be a full-back. And though he spent a few more games roving and up forward during the rest of that debut season (a period that brought him his one and only goal in Collingwood colours), he soon took over from Saunders on a permanent basis.

Once in position between the goalposts, Dibbs quickly assumed the air of one who had played there all his life. Only a couple of years later, The Sporting Globedeclared that Dibbs already could be regarded as a worthy successor to the great Collingwood full-backs who had preceded him. “He is not at all showy, but scarcely ever makes a mistake,” the paper said. “He does not leave his goal unguarded often, and when the ball comes his way he will often stop progress with a well judged mark or a quick dash away.”

Most reports on Dibbs throughout his career emphasised his consistency, reliability and soundness. Dibbs was not a flashy player and never sought to be. He just went about his job quietly and did it exceptionally well. Bruce Andrew once said that Dibbs was a “a marvellous footballer but vastly underrated by everyone except his teammates”.

Dibbs’ approach to football closely reflected his off-field personality. He was a quiet, reserved man who did not drink. Although he enjoyed the camaraderie at Collingwood he did not “knock around” the local area with many of the other players, preferring instead to spend time with his family. He had four daughters who were all seriously involved in competitive netball and swimming (Charlie was himself a keen swimmer). Much of his spare time was taken up with travelling and watching his girls compete in events all over Melbourne. The family did not own a car, so all the travelling was done by public transport.

During the Depression things got even tougher. Charlie worked as a stitcher at Sherrin’s football factory, and the seasonal nature of the work meant that summers tended to be a little barren work-wise. At one point early in his career, well before he was married and while he was still living at home, his only suit, unbeknown to him, was put in hock each week and taken out every Friday for him to wear to the game on Saturday.

He enjoyed staggering team success at Collingwood, playing in the Premiership teams of 1927-30, and again in 1935. Towards the end of his career he moved across to the back pocket — where logically he might have been expected to play more football — as Jack Regan settled into full-back.

His final game at Collingwood was the 1935 Grand Final victory against South Melbourne, though Dibbs never remembered much about it; he was severely concussed late in the game and was out to it for some time, the celebrations continuing around him as he lay on the trainers’ table. He was incapacitated for about a month afterwards, and family members maintain he was “never the same”, believing the knock may have contributed to the illness that eventually led to his death in 1960.

He went to Geelong as captain-coach in 1936, then coached in Tasmania and at Essendon seconds and later became chairman of selectors at Preston. But he was still a Collingwood lad, held in great regard by those at the club who had seen him play.

It was an anonymous supporter who perhaps paid him his greatest compliment. Dibbs played his 200th game for Collingwood at Geelong in 1935. On the train on the way back, his teammates made a presentation to Dibbs’ wife to mark the occasion. There were a few other people in the carriage, one of them an old man in the corner who watched quietly. The next week Dibbs received a letter, in which the writer said that as a keen student of the game he had long appreciated Dibbs’ “manly play” and in particular his efforts against opposing forwards. The letter was signed “The Old Man in the Corner”, and a cheque for one guinea was enclosed. A few weeks later he wrote again, this time with a gift for Dibbs’ wife. There are many trophies and awards one can win as a League footballer. Few could ever have meant more than those Charlie Dibbs received from “The Old Man in the Corner”. They were a fitting tribute to a wonderful footballer.