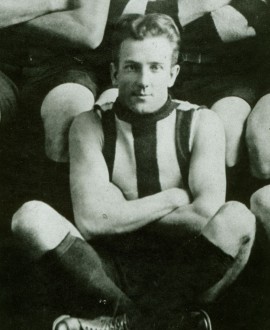 Collingwood has, over the years, become justifiably famous as one of the great family clubs in Australian football, with a huge number of brothers, father-sons and other relatives having worn the black-and-white jumper. As it turned out, the club’s very first father-son combination was one of the best – Charlie Pannam Snr and his oldest son, Charlie Pannam Jnr.

Charlie Jnr achieved the honour of becoming the first ever son of a former Magpie to pull on the jumper when he debuted against Fitzroy in the third round of 1917. After that debut, the newspapers were understandably quick to bring his father into the story. The Sporting Judgenoted how proud Charlie Snr must have been “for Charles junior was adding chunks to the family escutcheon in grand style. The youngster is as full of tricks as the old stager was, can handle the ball and kick well, and only needs the polish that attends experience to develop into a front ranker.”

The paper was right on all fronts. Charlie Jnr developed into a ‘front ranker’ very quickly indeed and, as he did so, it became more and more obvious that the youngster had inherited many of his father’s playing traits. In fact it was uncanny how similar they were, something the Heraldpicked up on in 1921.

“Young Charlie is indeed a chip off the old block,” it said. Those who remember the father can see the strong resemblance in the play of the son. From the same position midfield there is the same dash, the same short, nippy runs and the same unerring instinct in shooting the ball on to a forward. It is football of the best class – the kind that made the Magpies famous.”

That story appeared just after Pannam had been voted by more than 5000 Heraldreaders as the best centreman in the VFL for 1921. “Young Pannam is one of the champions of the League,” said the newspaper. “He has great speed and resource, skill in the air and is quick with the ball. Once in possession he darts at full speed for a few yards, throwing off his opponent with the elusiveness of a wriggling eel, until he gets into the desired position. Then, with a neat stab kick, he shoots the ball to a comrade up forward and is back in his place waiting for the next bout.”

Charles Elliott Pannam was, almost inevitably, a mad Magpie fan as a kid (like so many, his idol was Dick Lee) but he didn’t actually play regular football as a youngster. He was a talented sportsman and a particularly good sprinter who would have been good enough to run professionally had he so desired. When he did at last start to take football seriously, his heritage ensured that Collingwood was always going to take a look at him. And they obviously liked what they saw, for he played early in his first season and missed few games in his six years at the club.

He started on the wing – where his father had made his name – but within a couple of years had made his way into the centre where, with Tom Drummond on one wing and Bill Twomey Snr on the other, he formed part of the most feared centreline in the game. As noted earlier he had all the tricks and twists and turns of his father, but was probably even quicker. He lacked Charlie Snr’s nose for goals and wasn’t quite as strong in the air but was every bit as good at ground level and in general skills, especially ball-handling.

In short, he was an outstanding footballer. “Pannam was brilliant,” reported the Heraldafter one game in 1921. “His dash was grand to look at, while his wonderfully quick turns and sidelong twisting puzzled his opponents. They could not anticipate the route he would take when he gained possession of the ball and Pannam never failed to round off his run with a well-pitched kick.”

Pannam was Victoria’s best player in the interstate carnival in 1921 and backed up again with another Big V jumper in 1922, when he was also named Collingwood’s vice-captain. At just 25, it looked like he’d been tagged a future Magpie skipper.

So imagine the bombshell that struck when Charlie announced at the end of 1922 that he had accepted a well paid position as playing coach of South Melbourne. A number of other outstanding players had left for more money in recent years – including big names such as Dan Minogue, Bill Twomey, Tom Drummond and Con McCarthy – but none of those had Charlie’s family background. Supporters were stunned and the club was outraged.

Unfortunately for Charlie, his departure was a bridge too far for the Collingwood committee. They were determined not to move from their firmly held belief that all players should be paid equally, but equally determined to put a stop to the talent drain that had started to seriously weaken the Magpie team. So the club decided that no clearances would be granted to players for rival clubs “except for legitimate reasons.” Such reasons didn’t apply in Charlie’s case: indeed the club was angered by what it saw as South Melbourne subterfuge in trying to falsely claim that he had moved into their area.

Collingwood’s hard-line stance meant Charlie Pannam Jnr had to stand out of football for three years, during which time he acted as South’s non-playing coach. Charlie Snr even made representations on his son’s behalf but Collingwood would not budge – even for a revered legend. Charlie Jnr did not take the field in a South Melbourne jumper until 1926. He stayed there until 1928, then coached at Brunswick and spent time umpiring in the country.

Fortunately, the messy end to his Collingwood career didn’t seem to affect Charlie’s – or his family’s – affection for the club. Having become something of a local personality after he moved to Vermont and set up Pannam’s Corner Store, he came back to Victoria Park in the 1950s as manager of the under-19s and secretary of the Past Players’ Association. He was still involved there when he died of a heart attack (suffered while playing cricket) in 1961.

Charlie Pannam Jnr was the first of the second generation of the famed Pannam-Richards clan. He suffered nothing by comparison with the famous father who preceded him, or the younger brother (Alby) and nephews (Lou and Ron Richards) that followed. The only tragedy is that he didn’t stay longer at Victoria Park: if he had, he might have been part of the famous Machine. That would have provided a far more fitting end to his time as a Magpie.