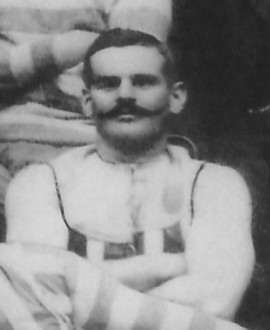 Few players in football’s early days travelled as far and as wide as Charlie Foletta did to ply his trade. His footballing journey covered more than 25 years, three states and at least seven clubs – ending it all as an umpire! His was certainly a varied and storied career.

Charles Dominic Foletta was born in Daylesford, the son of a Swiss farmer who migrated to Australia and became a successful miner. When the family moved to Melbourne, young Charlie became an avid Fitzroy fan and used tocarry the Maroons’ Jack Elliott’s bag into the ground in order to gain free admittance.

But Charlie was a handy footballer himself, and played seniors with Coburg while still just 15. By 16, in 1892, he was captain of the team – a remarkable achievement if true (newspaper reporting of the time could be unreliable). The club still expected him to be playing there in 1893, and even named him on the committee. But in April he tried out with Footscray, starring in their last practice match against Williamstown. Two weeks later, however, he was lining up in the forward pocket for Collingwood in their opening game of the season against Carlton.

It’s not clear how he suddenly came to be a Magpie rather than a Dog but, still just 17, he played well that day, kicking a goal and attracting positive reviews. “Foletta, the late captain of the Coburg, in addition to kicking a goal, did a lot of good work,” wrote The Sportsman. The Argus said he had been “very conspicuous”. This performance set up up an encouraging debut season in which he played 15 games, mostly as a forward pocket, half-forward flanker or on the ball, and was frequently named among the best players.

Charlie was essentially a strongly built rover, although later in his career he would also play on the wing and in defence. He was once described as “sound, reliable and dashing” with “untiring energy”, and his marking and handling of a wet and greasy ball was said to be “the theme of admiration” in another game. The Sportsman described him as a “proper Trojan” during his time with Collingwood. He was fast, hard-working and didn’t mind when the games got a bit ‘willing’.

The Magpies thought they had found a good young player at the end of that first season, and the fact that he didn’t turn 18 until the season had ended excited those who thought he could develop into something special. But after playing in the first practice game in 1894 he shocked the club by deciding to play with Fitzroy Juniors instead – thus beginning his footballing odyssey.

He played so well with the ‘Roy juniors in 1894 that was he was chosen in a combined juniors team that played Essendon at the start of 1895. That was enough to spark the interest of the Fitzroy seniors, and he played about a dozen games for them across ’95-96 before crossing to Brunswick. Foletta then rejoined Fitzroy for the 1899 VFL season and made five appearances midyear. He was cleared to Northcote in 1900.

In 1902 he bobbed up in WA, playing 19 games and kicking two goals across two seasons as a wingman with East Fremantle, helping them to two successive flags. In 1904 he returned to Victoria with Northcote (where he became one of the officials on the Victorian Junior Football Association), before captain/coaching Launceston City to NTFA premierships in 1907 and 08. He later returned to the VFL as a goal umpire and officiated in 31 games from 1913 to 1915.

Charlie Foletta played with Coburg, Collingwood, Fitzroy Juniors, Fitzroy, Brunswick and Northcote, as well as East Fremantle and Launceston City. And they’re just the clubs we know about! He captained teams, led them to flags, and then ended as an umpire. Any way you look at it, that is a hell of a footballing journey.