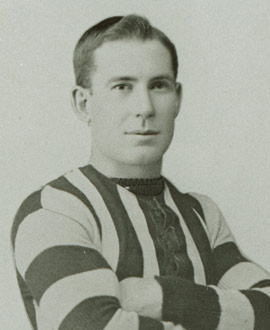 Even in a club famous for its remarkable family ties, the Pannam/Richards clan stands out for a series of records that are unlikely ever to be equalled. And Charles Henry Pannam was the man who started it all.

Charlie played 229 games, kicked 111 goals, won a League goalkicking trophy and captained the club. His younger brother, Albert, played 28 games between 1907-09. Charles bore five sons, two of whom proved just as adept at VFL football. Charlie Jnr – the first father-son in Collingwood history – was regarded as one of the best centreline players of his day while the youngest of the brood, Alby, played 181 games, kicked 453 goals and, like his father, captained the club.

One of Charlie Snr’s daughters also came to the party, producing two sons – Lou and Ron Richards, you may have heard of them – who between them contributed another 393 games and 537 goals.

In all, the various members of the Pannam/Richards dynasty played a total of 928 games, kicked 1125 goals, produced three club captains, won eight club goalkicking awards, one League goalkicking award, one Copeland Trophy and were a part of 19 Grand Final sides, for eight Premierships. It is a staggering record.

Charlie Pannam Snr would have had no idea what he was starting when he began his Collingwood career way back in 1894. At that stage he was just another local kid hoping to make it with the municipality’s newly formed team.

Charlie was born at Daylesford in 1875. Melbourne beckoned the Pannams while Charlie was still young, and by the early 1890s he was making a name for himself with the local Collingwood sides. In 1891 a “Panham” was recorded as playing for the Young Natives’ team, and in 1893 Charlie enjoyed a particularly good season with the Collingwood Juniors, regularly winning praise for his “dashing play”.

By 1894 it was already becoming the norm for successful players with the Juniors’ team to cross to the senior side, Jack Monohan having made the transition the previous year. But it was North Melbourne and Richmond who made the first approaches to young Pannam, and one newspaper reported in April of 1894 that he would be “a certain starter” for North that season.

Pannam’s first game for the year was in a combined junior representative side against Essendon, where he did well. That seems to have sparked Collingwood’s late interest, and they promptly trumped North and hurried Pannam into a black-and-white jumper for the opening round of the year. From that point on, he was to be a near-permanent fixture in the Collingwood line-up. He missed only a handful of games throughout his 14 years at Collingwood, and at one point went seven years without an absence, along the way becoming the first player to play more than 100 VFL games.

From that first season, Pannam impressed observers with his pace, cleverness and skills. The Sporting Judge, for example, noted that he “dashed down the ground like a sheet of lightning”. The Argus praised his aerial skills: “There are few men of his own size whom he cannot beat in getting the ball in the air, but he is tricky — in more ways than one,” it said. Almost all observers were taken by how well he delivered the ball. Former teammate Ted Rowell said Pannam was a “past master” in wing play. “He was most consistent, and especially good in finals,” said Rowell. “He usually disposed of the ball with a beautiful fast stab to a teammate.”

This was particularly so after the club’s historic journey to Tasmania in 1902. The opposition in one game was so weak that the Collingwood players began toying with them. Dick Condon started using peculiar, short spearing kicks that he would pop just over the heads of his opponents to a teammate. Pannam and Teddy Rowell joined in, and the stab kick was born.

After a rough sea voyage back to Melbourne the Collingwood players, many of whom were still seasick, had to head straight to Geelong. They used the new kick they had developed in Tasmania, and ran rings around the Pivotonians. They continued to use and refine the kick (with Condon, Pannam and Rowell as its best exponents), and other teams found they could not cope with the speed and the system of this new style of play. Collingwood was not beaten for the rest of the year, and won the 1902 and 1903 flags. The game was never again the same.

Pannam was vital to the team’s success during those back-to-back years. At that stage he was still playing on the wing, where he had spent most of his career and came to be regarded as one of the most brilliant footballers of his time. There he formed part of a couple of crack centreline combinations, firstly with Charlie ‘Buffer’ Sime and Bill Strickland and secondly with Sime and Fred Leach. Both Pannam and Leach were renowned as “wanderers”, something that was regarded as very risky in those days of strict position play and only to be tried by either the best or the most foolhardy of players.

As Pannam began to slow down he moved to the forward line, where his clever skills, goal sense and uncanny anticipation brought him 86 goals in three seasons, including 38 to win the League goalkicking title in 1905 (the same year in which he was made captain). It was a goal sense that was to re-emerge 30 years later through youngest son Alby, then again through grandson Lou, neither of whom was exactly shy when it came to shooting at the big sticks.

Throughout his career, Charlie became famous for his pace, skills, evasiveness and feisty, cheeky nature. He was hauled before the VFA or VFL committees several times to answer misconduct charges. But it seems he got away with his little tricks far more frequently than he was caught. In 1903, “Observer” in The Argus bemoaned Pannam’s ways: “It is a singular coincidence that Pannam exasperates every man who plays against him with his sly and spiteful tricks, yet watches the umpire so carefully that he never gets into trouble,” he wrote. This “rat cunning” also manifested itself in the family’s subsequent generations.

Off the field Charlie spent virtually all his working life at the old Yorkshire Brewery. In The Kiss of Death, Lou said his grandfather “wasn’t one of the hardest workers”. Ron Richards remembered old Charlie as a warm, kind man who frequently gave his grandsons sixpence.

After three years as Collingwood’s goalsneak Pannam again donned the guernsey for the 1907 season. He lasted just two games before retiring, taking up the job of coaching the Ballarat team in their annual game against the League. Later that season he transferred to Richmond (then in the VFA) as captain. He saw them into the VFL in 1908 but later left when he became upset that he was overlooked for the coaching job that went to his old teammate Dick Condon. In 1909 and 1910 he coached at Preston, and eventually got his chance to coach Richmond during that club’s turbulent 1912.

But it’s his time at Victoria Park that everyone remembers. Pannam left a legacy at Collingwood richer than anyone could have imagined, one that stretched well into the 1950s. Every Magpie fan should be grateful he chose us over North Melbourne way back in 1894.