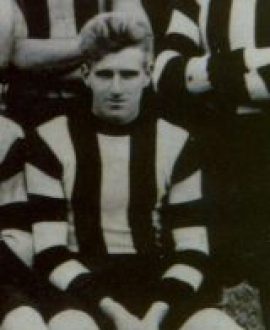 Victoria Park was home to some outstanding speedsters in the 1920s – fleet-footed midfielders such as Stawell Gift winner Bill Twomey Snr, Charlie Pannam Jnr, Bruce Andrew and George Clayden, many of whom won serious foot races. But few footballers have ever been able to claim the athletic prowess, or achievements, of Charlie Milburn, who was the champion sprinter in Australia from 1921 to 1923 – the fastest man in the land.

Not surprisingly, it was his pace that was also the outstanding feature of his game as a footballer. He played mostly on the wing, where his speed could be used to greatest effect. His skills were good, though critics noted that his kicking improved immeasurably when he discarded the punt and learned how to stab kick.

He was not always a regular selection at Collingwood, something that perplexed Jack Worrall, writing in the Australasian: “Every now and again he [Milburn] is dropped from the team but why I do not know. Every time I have seen him he has comported himself gallantly and well. Where his advantage comes in is that in a run for the ball he invariably has first use, thereby cramping his opponent’s activities. He keeps wide and his pace tells.”

Milburn had come to Collingwood from North Melbourne, then in the VFA, when the Pies needed an injection of speed after the controversial departures of Twomey and Pannam at the end of 1922. “The aim of the Collingwood executive has been to fill up and strengthen the depleted centre line,” noted The Age after the 1923 practice matches, “and their attention has been focussed on finding men to do this. In Milburn, a well-known Sheffield handicap runner, they have a promising wing man. He shows fine dash, and places the ball well. In being able to kick with either foot he is possessed of an invaluable asset.”

He made his senior debut just two games into his first season, 1923. After that first game, the Sporting Globe wrote: “Charlie Milburn excelled in the open stretches, and with more practice in League company will make a class footballer.”

And that’s the way it turned out. He never quite became a regular, or a star, but he still managed 60 games over five seasons. His trademark was those lightning dashes down the open spaces, journalists frequently noting how he could take the ball from the wing to the goals “by sheer, brilliant dash”. He could sometimes try to run too far, but it was a habit he gradually eradicated from his game.

He enjoyed an impressive 1927 season, playing 16 of the 20 possible games, including a spot in that year’s Premiership side. This description from the Sporting Globe  after one particularly exhilarating display was typical of the reviews he earned that year: “Charlie Milburn gave one of his best displays for the season against Geelong. Playing on the wing, he made few mistakes. He showed great pace, and initiated many Collingwood attacks with lightning-like rushes to the ball and clever kicks into position.”

But while seemingly at the top of his game, he stunned Magpie officials by leaving to take a lucrative coaching job in Stawell the very next year (just as Pannam and Twomey had done before he joined). He returned for another brief crack in the VFL, with Essendon in 1929, before heading off on a near-permanent roadshow. Charlie had been born in Tasmania into a mining family in 1899 and later moved to Melbourne, where he lived in or around the Preston and Northcote areas for most of his life. But once he left Melbourne after his stint with the Bombers he moved constantly, he and his family going wherever work or sporting involvement beckoned. He had four boys, three of whom continued the Collingwood connection; Pat played six senior games in the 1950s, while Jim and Chris played with the under-19s.

Wherever his journeys took him, Charlie Milburn always found himself coaching or getting involved with local sporting teams. He just couldn’t help himself, and loved being a part of it all. He was still playing country cricket into his 50s. One day late in 1953, a week after he’d taken 6-36, he was preparing to take strike and suffered a fatal heart attack at the crease. His youngest son, Chris, was 12th man that day and was one of the first to reach his dad’s side. Although tragically premature, the manner of his passing provided a fitting end to a remarkable sporting journey.