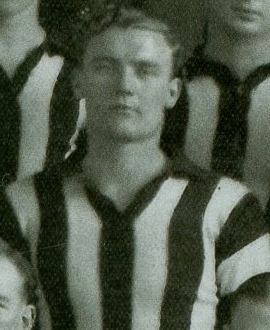 Another graduate of the Collingwood schoolboys matches, Charlie Newman made his debut with the seconds (Collingwood Districts) at the tender age of 15, in 1936.

He was born at Yarra Junction and followed the well-worn path to Victoria Park via Collingwood Tech, also having played for Parkside. In addition to being a star footballer he was an excellent cricketer and swimmer. After getting his start with the seconds he shifted to Alphington midway through 1937, but returned to the Districts team later the same year.

It turned out to be a long apprenticeship for the schoolboy star, as he remained with the seconds throughout 1938 and ’39 as well, eventually totalling 50 reserves games. After one of those 1939 games, The Sporting Globe wrote: “He has shown steady improvement since he graduated from the schoolboy competition three years ago, and his game last week stamps him as a future league player.”

In 1940, at long last, Charlie made his senior debut, named on a half-back flank against Geelong in Round 2. He stood just under 5’11” and weighed 12st 7, and had been described as a “fast moving follower from the seconds”, but played most of his senior games on a back flank or in the back pocket. He played eight games in a row and, while attracting relatively little fanfare, did manage to attract some positive reviews. The Argus, for example, said he “put in fine defensive work” against St Kilda.

He returned to the seconds after those eight games, where he would go on to be one of the team’s best players in their Premiership win later that year, again playing off a half-bank flank.

Charlie added nine more senior games over the following two years without ever nailing down a regular senior berth. He crossed to Melbourne in 1943 and played a further 15 senior games there across three seasons. His brother Dave took a similar path, playing 49 games with the Pies before crossing to the Demons in 1947.