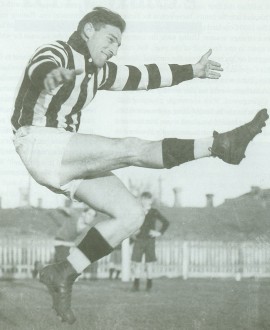 Has there ever been a player more committed to Collingwood – not only the football club but also the suburb and its people – than Charlie Utting?

For a start he was a third generation local lad with strong connections to the football club. His uncle Ern had played 16 games for the Pies in the early 1920s and was a star with Collingwood Districts, kicking more than 90 goals in the 1919 season. Charlie lived, worked and was educated locally, and excelled for St Joseph’s school in the schoolboy curtain-raisers played before senior matches at Victoria Park. When he left school he played on Saturday mornings with the Brewery team, on Saturday afternoons with the Abbotsford sub-district side and on Sundays with the local Catholic Young Men’s Society (CYMS) team.

He was as Collingwood-mad – and as football-mad – as they come. He also played cricket with Collingwood seconds as a left-hand batsman, but during the winters would spend every spare minute around Victoria Park. On weeknights he and his friends would turn up to watch training and to have a kick on the hallowed turf. So if he was excited to be given the chance to play with Collingwood’s seconds in 1942, it was the classic dream-come-true when he got to wear the black and white jumper in the seniors in 1943, when the playing list was decimated by war service. Former teammates would later recall that he was “100% dedicated to the club from the moment he walked in”.

But the best proof of his love for all things Collingwood came when he walked out– suddenly and unexpectedly – in 1950. He had just enjoyed his best-ever season of football, winning the Copeland Trophy and playing for Victoria, and he was still only 27. But Utting was needed in the family motor wrecking and repair business and, as one of 13 children, he understood the sacrifices that family life sometimes demands. He was not short of offers from other VFL and VFA clubs but he refused them all in order to give back to the local community. “It just wouldn’t have felt right anywhere else,” he said later.

So he stayed involved as playing coach of the seconds for three years, where he made such an impression that many felt he could have made an excellent senior coach, and later spent eight years on the committee at Victoria Park. He also broadened his involvement with the Magpie Football Club, a local team that used to play in a Sunday Amateur competition (this competition was a big local attraction, often drawing crowds of 5000 or more). He’d coached the Sunday Magpies even when he was a VFL star, leading them to a flag in 1949: after his retirement he started playing for them too, and kept doing so until he was nearing 40. Charlie became renowned for his pep talks to the Sunday boys, and crowds would cram into the rooms just to hear his speeches.

When he finished with the Sunday Magpies he moved on to coach the Collingwood YCW side. He moved into local government, too, spending time with the Collingwood council and even serving a term as mayor. Clearly, this was a man who bled black and white. And that love of Collingwood, that special spirit, had infused Charlie Utting’s football from the moment he walked into Victoria Park.

Although extremely talented, he was not a graceful or stylish footballer by any means. He had a nuggety build and an approach to match: he was a desperado who would do anything to get the ball or stop his man, or both. Opposing rovers quickly came to hate resting on him when he played in the back pocket, because they received very little ‘rest’ at all. Instead Utting would delight in harassing and tormenting them – then grabbing the ball himself and hurtling off before delivering expertly to a teammate, as he could kick beautifully with either foot.

He was, of course, also a great team man, and completely committed to Collingwood’s success (other than in his persistent refusal to adhere to Jock McHale’s demands that players turn up to games at least 30 minutes before the bounce – Utting alwaysleft it as late as possible to arrive). That meant he was initially happy to play in any position as long as he got a game. But he’d played most of his junior football in the centre, and that’s where he really felt he belonged. But Bill Twomey had that post sewn up, so Utting had to wait, mostly playing in the back pocket but also spending time at half-back or half-forward, or occasionally on a wing or even roving.

In 1949, however, Twomey got injured. So did his first replacement, brother Pat. So Utting finally got his chance in the pivot – and he grabbed it. His desperation and aggression at the ball were valuable assets in the thick of play, and though many felt he was too small for the centre he proved them wrong. He finished third in the Copeland in 1949, and kept the post in 1950, when he was one of the stars of the season. “He is quick off the mark – that is almost the first requirement of a centreman – has excellent judgment, is a good mark for his size, places the ball to advantage either with a stab kick or a long driving drop, and is most tenacious,” wrote the Argusin choosing him as the best centreman of the year.

He played for Victoria at the ANFC Carnival that year and won his first Copeland Trophy. A renowned fitness fanatic, he clearly had plenty of good football left in the tank. But the family business called, and a great talent was prematurely lost to the game.

Luckily, he was not lost to Collingwood – either the footy club or the wider community. In many ways Charlie was a bit of a rough diamond: there were no pretensions about him, but that’s what won him many friends both within the football club and outside. In summing up his stellar 1950 season, the Argushad noted that there was no better clubman going around, and they were right: he was a fine player and one of football’s greatest clubmen.

That was Charlie Utting – Collingwood to the core.