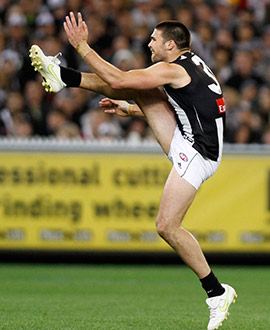 A man mountain who rose to prominence during Collingwood’s golden days of 2010-2011, forming a dangerous combination with fellow key forward Travis Cloke.

A powerfully built player and a reliable set shot for goal, Dawes possessed remarkable endurance and was a regular in the senior side for three seasons but was traded to Melbourne after struggling late in 2012.

In 2006, his final year of schooling, he played for Sandringham in the TAC Cup U18 competition, as well as for Brighton Grammar, but injured a knee during the season. He required a full reconstruction that meant he slipped down the order in the National Draft. He was selected by Collingwood with pick No. 28.

Dawes was forced to sit out the majority of the 2007 season due to his knee construction. He recovered in time to return via the Williamstown reserves mid-season, kicking seven against Bendigo in his second reserves match.

He kicked four goals in his VFL debut for Williamstown against Port Melbourne late in the home and away season in Nathan Buckley’s comeback match and ended the year on a bright note, playing two VFL finals.

He started 2008 in the VFL, playing in each of the first 16 matches of the season. He struck a purple patch midway through the season when he kicked 11 goals in five matches.

As luck would have it, he timed his run superbly, kicking five goals in wet conditions at Kardinia Park only days before senior teammates Alan Didak and Heath Shaw were suspended for the season.

It resulted in Dawes’ debut alongside John McCarthy against St Kilda the following week. He did his reputation no harm, kicking two goals (including the first of the match with his first kick).

He was quiet until the Elimination Final against Adelaide at Football Park when he kicked three goals in only his sixth match. Had played in two finals by year’s end, providing an excellent launching pad for 2009.

Dawes played in two pre-season matches but was forced to wait until round 13 before he returned to the senior side. He could manage only three more games and despite impressing against the Crows in round 19 (15 disposals, two goals, seven hitouts) he was omitted before the finals. He continued to work hard in the VFL, kicking 28 goals and earning plaudits for his performances in the finals.

In 2010, a year that loomed as make-or-break in Dawes’ career, the power forward established himself as a fixture in the senior side and was a key figure in the premiership win.

Promoted to the team for Anzac Day in round five, Dawes kicked seven goals in his next three games. He was demoted to the VFL team for a fortnight (kicking five goals in a losing side against the Northern Bullants at Victoria Park) but was quickly recalled and never looked back.

His season output peaked in round 14 (four goals against West Coast) and round 20 (20 possessions and two goals against Essendon) and he earned his first Brownlow vote with three goals against Port Adelaide.

A steady performer in the finals, Dawes went goalless in the drawn Grand Final but fired up with two second half goals to end his breakout season with 30 majors.

He made a brilliant start to 2011, playing in the pre-season premiership, while an increased fitness base meant that he was able to make a greater contribution around the ground illustrated by his 26 disposal, two goal game against North Melbourne in round two.

He remained a weekly contributor until breaking his knuckle in round 15.

Calf issues further compounded his rehab, and it meant he was forced to wait until round 23 to make a return. He helped keep Collingwood in the game in the famous Preliminary Final against Hawthorn, kicking three goals including the all-important first of the last quarter. But Dawes subdued on Grand Final day and did not look like his normal self.

Ahead of 2012, Dawes was earmarked to spend more time as a relief ruckman following the retirement of Leigh Brown. While he fought admirably, at 193cm, he was unable to have the impact he and new coach Nathan Buckley would have been aiming for.

He had a quiet season in front of goal, kicking just 16 from 23 games, but lifted in the Qualifying Final when he collected 20 disposals. He hurt his knee against West Coast the following week and underwent an extensive rehabilitation program to ensure he was fit to take on Sydney in the Preliminary Final.

Sadly, that night proved Dawes’ last in a Black and White jumper, ending his 71-game stint with a goal from 11 disposals. At season’s end he was traded to Melbourne. Collingwood received selection No. 20 (Tim Broomhead) as compensation.

Dawes battled injuries in his first year with the Demons but notched his 100th career game in 2014.