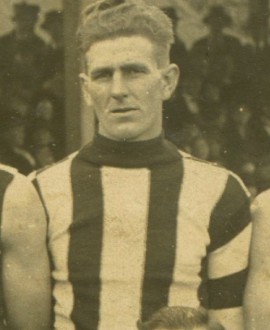 Clem Splatt’s connections to football stem well beyond his two games for Collingwood in 1922.

Splatt made his VFL debut in round two, 1922 against South Melbourne. Work commitments in Eildon restricted his time in the black and white and his second game, against Melbourne in round eight was his last for the club.

Perhaps his debut may have come earlier if it wasn’t for a wood chopping accident which saw him slice the top of his finger open.

It was this family pastime that acquainted Splatt with a pair of footballers that went on to share one of Collingwood’s most famous names. His father, Barl Splatt, was an axeman who competed with Harry Coventry – the father of Gordon and Syd Coventry.

A year before Gordon made a Collingwood debut that would start a 306-game career, the team photo of the 1919 Diamond Creek Football Club pictures him sitting side by side with his best friend Splatt, with Syd also seated not too far away.

After a season out of the game in 1923, Splatt returned to Melbourne in 1924 and joined a Hawthorn side that would enter the VFL in just a years’ time. He played in the Hawks’ first ever VFL game, was the first ever Hawthorn player to record a Brownlow vote and went on to poll three votes to finish fifth in the 1925 medal.

Despite the separation, his friendship with the Coventrys remained. He played two games for Victoria with Gordon, lining up at centre half-forward as Gordon played full-forward against New South Wales. But the majority of his football was played at centre half-back, and there he was a significant force.

Clem stood over six feet tall and weighed more than 14 stone, making him an imposing figure for the time. He was a beautiful mark, one of the best in the business, and one newspaper described him as “a tower of strength” at half-back. But in 1926 he injured both his knees badly and missed almost the entire season. He tried to come back in 1927 but the knees gave way and he decided to retire from elite level football. He moved to Hastings and became captain-coach of the local team, a role he held for four years. Although his knees still regularly gave him trouble, his marking remained a standout feature and he was a dominant force in that competition.

Football remained a major part of Clem Splatt’s life until the very end. Indeed he died while watching a football match in 1963, at the Punt Road Oval as Richmond battled with Carlton. For someone who loved footy as much as he did, it seemed an appropriate way to go.