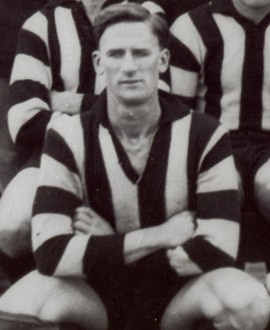 For a few brief moments in 1939, Collingwood selectors were congratulating themselves on having pulled off what looked like the recruiting steal of the season.

Cliff MacRae, a talented, fast-moving half-forward from Footscray, had been dropped by the Dogs and fallen into the Magpies’ laps midway through the year. In just his first game for the Pies, the highly skilled MacRae kicked five goals – and the media was filled with fevered stories: how had Footscray let him go? How brilliant were the Pies to have picked him up? Could he now take them all the way to a flag?

But incredibly, MacRae would only play two further games for the Magpies, and his senior career would be over by the end of the season.

It seems remarkable, but is somehow in keeping with a career that promised much and delivered plenty, but somehow still feels unfulfilled compared to what it might have been.

Cliff and his older brother Cam had attracted attention early in their days at Werribee in the Geelong and District League. Both played at Werribee High School, then with the quaintly named Metropolitan Farm club, where they played in a Premiership in 1931 (Cam at centre half-back and Cliff at centre half-forward).

In 1932 they crossed to Werribee, and again turned heads. “Their sparkling play has earned for them a reputation which has seldom been gained by any player in his first year out of junior ranks,” wrote The Weekly Times midway through the season. Cliff’s play, the paper said, was marked by cleverness. “He is plucky and determined, and possesses a pair of hands as sure as his brother’s.”

After more than 50 games with Werribee, and having established a reputation as one of their finest players, Cliff crossed to Footscray in 1935. Over the next four seasons he established a reputation as a dangerous and highly skilled half-forward. He also spent some time on the wing, and there were some who likened him to Allan Hopkins and felt he should be played in the centre. But half-forward was where he spent most time, and it was an area that seemed to fit the slightly inconsistent nature of his play.

He was a free moving half-forward flanker or centre half-forward. He was lithe, talented, a good mover and used the spaces intelligently. He had good hands and was a lovely kick of the football. He played 58 games with the Dogs and kicked 62 goals, establishing himself as one of their better players. In April of 1938, he was even spoken of as a likely candidate for the captaincy.

That honour didn’t come his way, but he finished the season on a high note, kicking a bag of five goals against Collingwood in a losing first semi-final. He was still just 24, and seemed about to enter his prime years as a footballer.

He struggled for form in the early part of 1939, but even so eyebrows were raised when Footscray first dropped him, then decided to clear him to Collingwood early in July. As The Argus noted at the time: “Much surprise has been expressed in League circles at the action of Footscray in omitting Cliff MacRae, and Collingwood has won the race for his services. Syd Coventry and Horrie Edmonds, both of whom were associated with Footscray, spoke highly of MacRae’s ability and he may be seen as Collingwood’s centre half-forward soon.”

The surprise levels went through the roof, however, after his Magpie debut. After just one game with the seconds he was named at centre half-forward against South Melbourne. He kicked three in the first quarter (one with a long drop kick, another from a lovely snap) and set up a further goal for Alby Pannam, on his way to a match haul of five.

“Scouting cleverly, he was always on the move to receive or carry on a pass and readily adapted himself to the Magpies’ system and clever backing up,” wrote The Sporting Globe. The Herald wrote: “The most consistent of the outstanding players was Cliff MacRae, the former Footscray player, who … was fast and sure in Colllngwood’s attack, and his five goals were only a part of the service he did for his side.” The Argus already started looking ahead, to what he might offer come September. Argus said: “MacRae’s long and accurate kicking should convert many attacks Into goals in the vital games at the end of the season. A wily position player and a sound mark, MacRae gives every indication of becoming an Invaluable complement to Todd the champion full-forward.”

The reaction at the Western Oval, of course, was less complimentary. The Sporting Globe headed a story with ‘Why Did Footscray Clear Cliff MacRae?’ “With an attack so lamentably weak, it is difficult to understand why Footscray’s officials omitted Cliff MacRae from their list,” it said. It quoted two unnamed officials being bombarded with questions by angry supporters. One responded, “To tell you the truth, it’s as much a mystery to most of us, as it is to you!” Another responded: “I’ve been wondering the same thing all the week.” But the most considered reply came from a third official, who explained that “the opinion of the selectors was that MacRae’s best football days were over.”

As it turned out, the Dogs were right.

That five-goal haul against South Melbourne proved to be a last hurrah. Macrae struggled with a thigh injury against his old team a week later, and was then troubled by a back complaint. He did not play seniors again until the Grand Final, when selectors pulled him back against Melbourne, but he kicked only one goal. He was named captain of the reserves in 1940 – never a good sign – and retired permanently after three games (in which, incidentally, he kicked 16 goals) because of injury.

So in the end, despite all the headlines, Cliff MacRae’s Collingwood senior career amounted to just three games and seven goals. He was a highly talented footballer, but as the Footscray selectors knew, his best days were over before he’d even made it into Victoria Park.