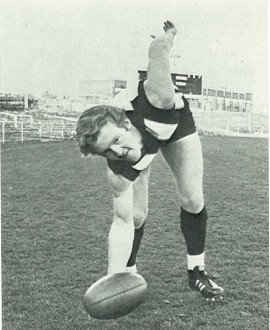 YOU could forgive Collingwood fans for almost doing a double take when the ball went forward during the late 1960s and early 1970s.

Des Tuddenham stood out wherever he was. He was hard, tough, had a ginger tone to his hair and he loved to crunch packs.

The only problem, at least in terms of player recognition goes, is that the Magpies had another player with similar physical attributes and that same unmistakable appetite for the contest.

His name was Con Britt.

As an Inside Football profile in the early 1970s detailed: “When Britt and Tuddenham played together on the Collingwood half-forward line, it was often difficult picking who was who. Both have gingery hair, both are willing and both are under six foot (Tuddenham was 180cm, Britt 179cm), and, oddly enough, both are former Ballarat YCW players.”

Britt’s career never reached the same heights as Tuddenham, but he still made a strong impression on Magpies’ fans, not just for his Tuddy likeness. He played 110 games, kicked 72 goals, and won plenty of admirers as a tough, no-nonsense half-forward who had an uncanny knack of finding the goals in some of Collingwood’s best teams. Then, later in his career, he would become an equally rugged back pocket player described as “the scourge of opposition forwards”,

Brit was born and bred in Ballarat, growing up with five brothers and a sister on the family’s potato farm at Dunnstown. Given the name ‘Cornelius’, it was turned into ‘Con’ from an early age, and football become one of his earliest passions, with his family barracking for Essendon.

He learnt his craft playing for Tuddenham’s old team, Ballarat YCW, but also managed 10 games with Golden Point in the Ballarat Football League. His local form began to attract the interest of all VFL clubs except Hawthorn and Footscray, but luckily he settled on Collingwood, at least partly because of Tuddy’s influence.

Breaking into a strong Collingwood team was never going to be an easy proposition. But some good form in the seconds was enough for Britt to win a chance – as a reserve – in Round 16, 1966, even if the papers couldn’t quite to get his name right.

Ahead of that game, the Age said of him: “Col (sic) Britt, a skilful forward flanker and wingman, was picked as the 20th man. The selection of Britt to sit on the reserves bench shows the former Golden Point player is very close to (on-field) senior selection.”

Just three days after his 19th birthday, Britt sat on the bench through most of his VFL debut, before coming on in the last term for Gary Wallis, having four disposals.

He had to wait until the opening round of the following season for his first full game, against Geelong, where he had 11 disposals, impressing in the No.27 jumper. It was one of 16 games he played in that 1967 season, and he kicked 15.19, entrenching himself in a team that ended up playing finals.

He looked at home in the VFL almost immediately. He was fast, strong, decent overhead and had a good nose for goals. Collingwood fans particularly warmed to his aggressive attack on the ball – and his opponents, qualities that were on display in the 1967 first semi-final against Geelong.

Britt kicked a goal and had 12 possessions in a five-goal loss, but made his mark in other ways that day. First he was involved in a collision with John ‘Sam’ Newman that saw the Geelong big man rushed to hospital where surgeons were forced to remove one of his kidneys (Fifty years later, Britt would apologise to Newman over the incident in a Channel Nine retrospective centred on the moment.) Then in the second quarter Britt bumped Geelong’s Denis Marshall into the fence, leaving the defender requiring four stitches.

Britt was hooted by Geelong supporters each time he touched the ball thereafter, but seemed unfussed: it was just the way he played the game.

He consolidated his spot in the team over the next few seasons, despite a few injury-enforced absences, and set himself up for his career-best year in 1970. Britt was brilliant that season, playing 20 games and kicking a wasteful 17.32 as he made himself a central part of one of the most lethal forward lines in Magpie history.

But his career stalled in 1971, managing only 10 games after suffering a depressed fracture of the cheekbone and struggling at times for form. In 1972, under new coach Neil Mann, he re-emerged – in the back pocket.

Asked to play in a new role, Britt initially wondered if it was too late for him to try the move, and asked for a clearance to VFA club Prahran.

He recalled: “I thought it was a little bit late in life trying to make it as a defender. I was dropped to the reserves and I was put in defence but really I could see no future for me at Collingwood on the backline. I was also very interested in going to Tasmanian team Latrobe, but I’d just bought a house in Bundoora and it influenced me to stay in Victoria.”

Thankfully, Collingwood refused to let him leave. He nestled in besides defender Jeff Clifton and turned himself into what Inside Footballdescribed as “one of the most accomplished back pocket players.”

After missing the first four rounds, he reeled off 18 games in defence and would go on to win the club’s most determined award – proof of his value and his commitment to the team.

It seemed as if Britt was set for a second life in the back pocket, but his VFL career was over just seven games into the 1973 season when he was dropped again, never to return. The year before he’d said he would like to play VFL football until he was 35: instead, Con Britt’s career was over at just 26.