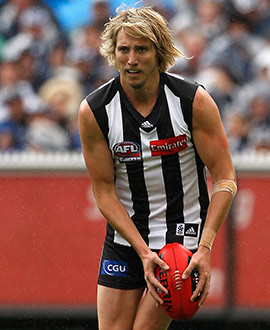 An exciting forward who captured the imagination of the Collingwood supporters during his peak with his wild blond hair and penchant for the spectacular.

Born and raised in Drouin, the town that produced Gary Ablett Senior, Thomas was named best afield in the 2005 TAC Cup Grand Final, kicking four goals in Gippsland’s victory as the team’s vice-captain.

He represented Vic Country at the U18 National Championships where he was named as an All-Australian as a half forward, and he was also named in the TAC Cup Team of the Year on the wing, polling 11 votes in the Morrish Medal.

Thomas was drafted to Collingwood with the second selection in the 2005 National Draft, behind Carlton’s Marc Murphy. It was considered a surprise at the time, as Gippsland teammate Xavier Ellis was the hot tip to be selected by the Magpies with their first selection.

Thomas first appeared for his new club in the NAB Cup of 2006 and was blooded officially against Adelaide in round one at Docklands. He took centre stage immediately, kicking two early goals and pulling in an early contender for Mark of the Year. He was nominated for the AFL Rising Star the following week. He again attracted media attention when he starred on ANZAC Day in front of 91,234 fans, taking one of the marks of the season and kicking two important goals.

He was important in the win over the Eagles in round 16 when the Pies snapped a three game losing streak, but he broke his collarbone leaping as the third man up at a ruck contest in the loss to the Crows in round 18. He managed to return in time for the  Elimination Final against the Western Bulldogs.

Incredibly, for a first year player, he spent only one game with Williamstown, the club’s VFL affiliate, during his comeback from injury, and showed his liking for the big stage with four goals in a final against the Northern Bullants. At season’s end he was awarded the Harry Collier Medal as Best First Year Player.

There was no sign of second year blues for Thomas, who was a strong contributor all throughout 2007 at half forward and occasionally in the midfield. He enjoyed a purple patch mid-season, kicking four against the Swans in Sydney to win three Brownlow votes, and single-handedly winning the game for the Pies against St Kilda in round 14.

The win over the Saints was memorable for the ‘goal that wasn’t’ – when Thomas evaded two tacklers before dribbling a miraculous goal from the boundary line, only for the goal to be disallowed as it was deemed he’d stepped out of bounds. He tapered a little as the season ended, but put in a gutsy performance against West Coast in the Semi-Final and finished sixth in the Copeland Trophy.

Thomas had a steady 2008 season, playing mostly in attack where he nailed 23 goals in 22 games. He was sublime in the 100 point win against the Eagles, attracting plenty of coverage for his four-bounce goal and subsequent celebration. He added an important goal against Adelaide late in the third term in the Elimination Final and represented Australia in the International Rules series under coach Mick Malthouse, ending the year in eighth place in the Copeland Trophy.

Season 2009 saw Thomas employed in a different role as to previous seasons, spending a lot of the year as a defensive half forward. He still had his moments, kicking the match winner against the Western Bulldogs in round 15 and bagging three majors and 16 disposals against Brisbane in round 18. He signed a new two year contract mid-season, and was one of the better performers in the Qualifying Final loss to St Kilda, kicking two goals.

But it was in 2010 that Thomas transformed his game, going from a flashy half forward to a full time wingman.

He increased his fitness base and subsequently his output, upping his average disposal count to 23.9 (up from 17.2) and his tackle count to 3.5 (up from 2.9). Importantly, he became a real weapon as the fourth midfielder behind Dane Swan, Scott Pendlebury and Luke Ball, and still managed to push forward to score goals (18.14 for the season).

He was excellent throughout the finals campaign, kicking a goal in each final and starting with 32 disposals against the Bulldogs in the Qualifying Final.

Thomas etched his name into club folklore with his performances across the two Grand Finals against St Kilda, enhancing his reputation enormously in the process. He had 26 touches and eight tackles in the drawn Grand Final, and was one player to stand up when the heat was on in the final quarter.

He repeated the dose with 27 possessions in the Replay, this time ending the day a premiership player. He ran third in the Copeland Trophy and tied for the Bob Rose Award (Best Player in Finals).

In 2011, he continued his improvement as a midfielder to the point where St Kilda coach Ross Lyon mused mid-season that Thomas may be the best player in the competition. Lyon’s comments followed a hot streak in which Thomas polled maximum Brownlow votes for two weeks running against the Crows and the Eagles.

He was suspended for two weeks mid-season for striking Saint Clint Jones but it did little to take the wind out of his sails. Another suspension in round 23 against Fremantle did, however, meaning he missed the Qualifying Final. Thomas went down fighting in the Grand Final defeat (31 disposals and seven tackles), and played in the pre-season premiership, finishing the year ranked sixth in the Copeland Trophy.

After the boom years of 2010-2011, Thomas’ output wavered in his last two years in Black and White. He played 20 of a possible 25 games in 2012, showcasing his newly shorn head in the process. He kicked 22 goals for the year but lacked the impact of the previous campaigns, save for his match-winning burst of three goals in the emotional Semi-Final win over West Coast.

The following years was the toughest of Thomas’ eight seasons in Collingwood colours.

Foot and ankle injuries held him to only five senior games, his lowest tally since his debut year of 2006 (when he played 16 games). He missed the entire NAB Cup owing to foot surgery and was brought back via the VFL where he was one of the best afield in the final practice match against the AIS-AFL Academy at the MCG when he won 25 possessions and laid five tackles.

He followed that up with 22 disposals against North Ballarat in the first round of the VFL and was quickly brought back into the senior side for the round three encounter with Hawthorn. Thomas had 19 disposals from 86 per cent game time but sustained a kick to the back of his ankle that would eventually see him sidelined for the majority of the season.

In the month that followed, he was used as the substitute against Richmond and was productive as a rebounding half back against St Kilda (34 possessions and a Brownlow vote) and Fremantle (25 possessions).

Unfortunately, the condition of Thomas’ ankle forced him to take a 14-week absence from the game. His attitude and commitment during his rehabilitation allowed him an attempt at an eleventh hour comeback ahead of the finals, but his season came to a halt during the second quarter of the VFL team’s win over Sandringham when he jogged from the field after experiencing discomfort in his ankle

With that, his season was done, and the attention shifted to his whereabouts for the 2014 season. Thomas eventually made the decision to cross to Carlton as a free agent where he was reunited with Malthouse, who coached him in the first 132 games of his career.

By way of compensation, Collingwood received pick No. 11 in the National Draft, which the club later upgraded to pick No. 6 in a trade with West Coast. The Magpies used selection No. 6 on young South Australian prodigy Matthew Scharenberg.

While Thomas’ move to Princes Park evoked strong emotion from the Collingwood faithful, it will never forget his role in the acquisition of the club’s 15th VFL/AFL premiership in 2010.