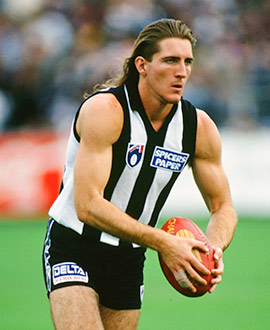 Three goals from his first three kicks. Three Brownlow Medal votes in his fifth game. Suspended for three weeks following his sixth game. Career over in black and white due to spine fractures after only 11 games.

If you had blinked, you might have missed Damian Houlihan’s career at Collingwood.

Yet so much happened to the key-position Magpie in his time at the club that few will forget what happened during his wild ride.

The first of four brothers to be on an AFL list – and one of three to play a senior AFL game – Houlihan appeared set for a long AFL career after a strong debut game in 1994, but circumstances conspired against him.

Collingwood was chasing another key forward to play alongside a young Saverio Rocca during the early 1990s. Houlihan appeared to fit the bill after the schoolboy teenager showed promise with John Longmire’s old club, Corowa-Rutherglen. He made his Ovens and Murray Football League debut as a 15-year-old in 1990, the year the Magpies broke a 32-year flag drought. He kicked more than 70 goals in 1991 and more than 90 in 1992.

Although he only stood at 188cm, such was his promise that the Magpies chose Houlihan – a Collingwood supporter – with pick 15 in the 1992 national draft.

He told the Herald Sun soon after being drafted: “Because I’ve followed them all my life I was really happy when they drafted me. A few other clubs spoke to me but I always wanted Collingwood.”

Houlihan moved into Coventry House on his arrival in Melbourne, while also working at Victoria Park. He showed promise in the Collingwood reserves in 1993, and got his senior AFL chance in round seven, 1994 after overcoming a knee injury. It was the game in which Gary Ablett Sr. took his famous one-handed mark that he grabbed to his chest over Magpie defender Gary Pert.

Incredibly, Houlihan’s first three kicks resulted in goals, a feat no other Collingwood player has managed. He had five kicks and a handball for his three goals – a noteworthy effort in the club’s 28-point loss.

He followed it up with another goal in his second game, though an injury spree to the Magpies’ defence – including Pert – meant Houlihan was conscripted to defence to help the club out.

“We tried him as a full back before (Jon) Ballantyne was even drafted,” coach Leigh Matthews said at the time. “So he may well end up being in the chair there.”

His fifth game stood out as much as his first, when the umpires gave him three Brownlow votes for his performance in keeping Adelaide’s Tony Modra to two goals (albeit 2.7). He had 12 disposals himself.

But the week after the umpires had him in the book for different reasons. He was reported for striking Richmond’s Chris Naish, “which sparked a melee”, and it cost him three weeks on the sidelines.

Houlihan explained: “I was intending to lay a shepherd and at the last minute he saw me coming and tried to evade me. His hands and my hands came up in self-defence and we clashed bodies and went to the ground.”

Luck completely deserted him in 1995. He managed only four reserves games before a debilitating back injury brought an end to his time at Collingwood. At the time then football manager Graeme Allan said Houlihan needed time away from the game to assist his rehabilitation, though there was a question mark about his professionalism.

He returned to the bush and did not return to Collingwood.

With his body rested for a season, Houlihan stepped out for Tatura, eager to get another AFL chance. He would say: “Sitting on the sidelines gave me a good look at how it’s played at top level, how to become a professional sportsman. I stopped and took a look at it seriously and realised I’d taken everything for granted.”

A call from Kangaroos coach Denis Pagan saw him selected by North Melbourne in the preseason draft ahead of the 1998 season. But he never got the chance to add to the 11 senior games he played at Collingwood.

It was the end of his AFL career, though not the end of his football career. He had a long and celebrated career at country levels, including kicking 10 goals in a Grand Final for Corowa-Rutherglen. He also played for Sunbury, East Burwood, Keilor and North Bendigo.

Two of his brothers, Ryan and Adam, had longer AFL careers. But Magpie fans will never forget Damian’s three goals from his first three kicks, or the promise at either end of the ground that never quite came to fruition.