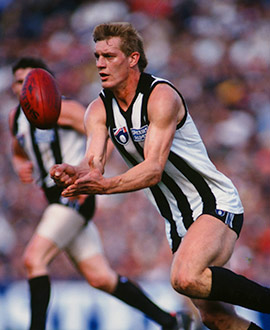 A ruckman from Woori Yallock who was thrust into the No.1 ruckman role at a young age.

He marked time in his second year and although he started slowly in the 1990 finals he eventually came good and outpointed Simon Madden in the Grand Final to help greatly towards the flag win.

He was never a prolific mark, but compensated with great strength in the packs. Over the years he resisted all attempts by Collingwood to make him move from Woori Yallock to somewhere nearer Victoria Park.

By his own admission he was something of a lout as a young man, but developed into one of the Collingwood team leaders. He said that in 1990 he had been lucky to be picked for the Grand Final after playing second fiddle to James Manson during the finals.

In 1996 he was plagued by foot, back and hamstring injuries. He had a hard competitive edge that was reflected in the rough facial visage with the missing teeth.

In 1995 he was involved in a controversial incident during Collingwood’s clash with Essendon when he was accused of racial abuse against Essendon’s Michael Long. The case led to the introduction of the AFL’s racial vilification laws.

He had a saga of run-ins with Essendon. In 1990 he kicked the Grand Final goal that sealed the flag for Collingwood and in 1994 he ran through the Essendon huddle before the game and precipitated a wild melee and prompted the AFL’s introduction of the melee rule.

Injuries restricted him from 1994 to 1995, but before that he had seldom been on the sidelines apart from the odd suspension.

Foot injuries and other problems saw him put on weight in 1997 and he struggled badly, but he started 1998 brilliantly before injuries and form deterioration hit hard.

After notching his 200th game in a rare victory out at Waverley Park in 1999, he crossed to Tim Watson’s St Kilda for a year and although he tried hard, he was unable to make a significant impact.

He twice represented Victoria in state of origin games and later served as a highly respected ruck coach with Hawthorn.

In March 2014, Monkhorst was inducted into the Collingwood Hall of Fame.