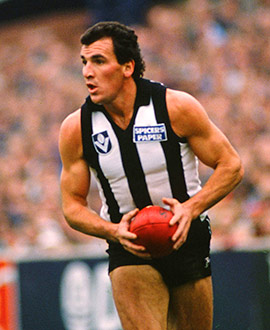 It is one of the most treasured images in Collingwood’s history: Darren Millane throwing the ball into the air at the end of the 1990 Grand Final, signalling that, at last, the Premiership flag was coming back to Victoria Park. Yet one year later that same image had assumed such an air of poignancy that it was impossible to view without having to choke back tears.

When Darren Millane died in a car crash in the early hours of 7 October 1991, all at Collingwood were numbed. The rest of the football world was similarly shattered, not just because of the loss of a great footballer and a great clubman, but because it challenged the notions of our heroes as being indestructible. We thought the man, like that final 1990 Premiership image, would endure forever.

For many it was impossible to comprehend. A year earlier, almost to the day, it was Millane who had appropriately held centre stage when Collingwood’s 32-year Premiership drought ended. Now the same flag which he had done so much to bring to Victoria Park was being lowered to half mast in his honour. Millane, the man frequently touted as the Club’s next captain, the seemingly indestructible young bull, had been cut down in his prime. He was just 26.

Darren Millane was one of that select band of footballers whose impact on a game extended far beyond the many kicks, marks and handballs that he gathered. He was one of those players who could lift a team not just by what he did, but by the way he did it. He kicked goals after bursting through tackles, cleared a path for others by busting up packs, and took marks by wrenching the ball from the hands of opponents. It was more than just spectacular — it was artistry with muscle. That physical element, that “presence”, is not something that can be learned or manufactured. Rather it is something inherent in the player himself.

“I have seen him do some remarkable things,” wrote Peter Daicos in his 1991 autobiography. “He is genuinely tough, there is no bravado in the way he approaches his football. He actually loves and thrives on the hard things — he has lifted Collingwood out of despair on numerous occasions.” Gavin Brown and Denis Banks were among many who rated him as the best player in the League around 1990.

In many ways Collingwood was lucky to have Millane at all, because three other AFL clubs had the chance to snare him before he even set foot inside Victoria Park.

He was born in Dandenong, lived in Noble Park and barracked for St Kilda. He was in South Melbourne’s zone, and even played for South’s Little League team one season. But South were then in the process of becoming the Sydney Swans, and Millane simply did not want to move north. The VFL’s first interstate club responded by sticking a $25,000 price tag on the youngster’s head — a ludicrous asking price for a kid who had not yet played footy beyond the under-16s. He tried at St Kilda but they were put off by the asking price. Instead he played with Dandenong in the VFA. It was the same story again in 1983. Hawthorn tried its luck in 1984 but Millane didn’t like the feel of the place and returned to the Redlegs.

He was appointed Dandenong’s deputy vice-captain for 1984, but two retirements left him captaining a VFA team at just 18 years of age. Midway through the year he was surprised to be approached out of the blue by Collingwood. And unlike Hawthorn and St Kilda, he fell in love with the place almost from the first night. He signed with the club two days later and at the weekend played for the seniors in a mid-season practice match in Canberra.

After just two games with the reserves, he was brought into the senior side for the game against Richmond in round 18. And although he made an immediate impact, it took years for him to truly settle into VFL football. By the time of his death, however, he stood as one of the competition’s most valued and respected footballers; a wonderfully skilled player of exceptional strength, toughness and courage.

He had just about the perfect footballing physique. He stood about 185cm (6ft 1in) and weighed in at a robust 89kg (14 stone). He was naturally athletic, fast and hit as hard as anyone in the game. A Millane hip and shoulder was a thing to be feared. He had one of the strongest pairs of hands in football, and could outmark most opponents, even packs of them. Millane also was blessed with a good spring. So good was his marking that, despite a relative lack of height, he was often used as Collingwood’s target from kickouts. His ball-handling was sure, and he was skilled on both sides of his body.

Millane was an intense competitor who hated to lose. He had an uncompromising attitude to the game that saw him always involved where the action was at its most fierce. He expected a similar commitment from his teammates, and was constantly urging them on (and sometimes admonishing them). With his strength, pace, and ferocity he was often likened to a raging bull. It was a good analogy. Those qualities, combined with his skills, meant he was rarely beaten in one-on-one contests — a handy attribute for a wingman.

The depth of Millane’s talent was underlined by his versatility. While he was most often stationed on a wing, he also played in defence, in the centre or on the ball and was often thrown forward when the attack needed a lift. Wherever he played it was full-on football. He played as if he had no fear.

He also played as if he couldn’t feel pain. Millane will always be remembered for his heroic performances in 1990 when he played the last home and away matches and four finals with a broken thumb. For Millane, the equation was simple: he had missed the finals of 1988 and 1989 and was not about to miss out again. The courage he displayed during those weeks was, like so much else in his game, inspirational.

Off the field Darren Millane was one of Collingwood’s great characters. He was confident, outgoing, almost brash at times — all qualities that were reflected in his game. And he attacked his social life with the same gusto as he did his football. (The nickname “Pants”, incidentally, came from a couple of especially garish pairs he wore during his early days at the club.)

There were times when that active social life helped get him into trouble. He had several brushes with the law after altercations at nightspots, one of which resulted in a two-year ban from interstate football. The incidents were a source of regret to him, but he had learned the hard way that being a top VFL footballer made him public property. “It’s taken me probably two or three years to realise just how much you are public property rather than just Joe Blow in the street,” he said a few months before his death. “I’m not saying I’m an angel, but I would not go out looking for a fight; then again I suppose I never walked away when I should have. Very hot-headed I was, and if someone would say something, I’d just answer back instead of laughing it off. I guess some of the places the trouble happened I probably shouldn’t have been there, but you can’t be a hermit”

But Collingwood people always saw another side to Millane. He did an enormous amount of work for the club in promotions, attending functions, visiting sick supporters and the like — usually without seeking any publicity. He won the Phonse Kyne Trophy for “services to the club” on three occasions, the last of them posthumously.

Tributes flowed from all quarters in a week of extraordinary public grief after his death. Nearly 5000 people crowded into the Dandenong Town Hall for a funeral the likes of which Melbourne had not seen for many, many years. The mourners came from everywhere; teammates, past players, club officials, Collingwood supporters, other AFL players and officials, supporters of other clubs, junior clubs, and people he had helped or visited in hospital. Millane had touched many people’s lives; none who knew him remained unaffected.

His #42 guernsey was retired permanently and the Darren Millane Perpetual Memorial Shield was struck to recognise the most inspirational efforts of a player. But in the eyes of many supporters, Collingwood already possessed a monument to Millane’s courage, skill and strength — the 1990 Premiership flag.