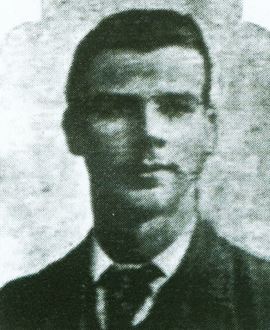 When Collingwood was casting around for players for its first season of senior football in 1892, it mined obvious sources like local junior clubs.

One of those clubs was the Collingwood Imperials (or ‘Collingwood Imps, as they were known), and one of the best players to emerge from that club was a clever centreman by the name of Dave Drummond.

Drummond had won a silver mounted pipe with the Imps for ‘best wing play’ in 1891, the year in which he turned 18. The newly formed Magpies were sufficiently impressed to offer him a spot for the 1892 season.

He debuted on the wing against St Kilda in Round 3 and almost instantly became a staple of the team, playing the remaining 16 games of the season, mostly in the centre. He was quick, handled the ball well and was said to be a smart and clever footballer. The Sporting Standard said that Drummond could be “put down as a regular star in all parts of the game”. “He deals it out to all comers,” the paper said.

He started the 1893 season in similarly hot form but suffered a serious knee injury after being knocked down in a scrimmage in the Round 3 game against St Kilda. The doctor who treated him said he should miss only a week. But one newspaper said Drummond looked “a picture of death” as he was carried off.

Unfortunately the journalist was closer to the mark than the doctor, and it soon became clear that Drummond’s injury was serious. He did not play again in 1893.

There were grave doubts as to whether Drummond would be able to return to the field, but he came back for the opening round in 1894 in great shape. “As a centreman he has few equals and no superior,” said The Leader. “It was pleasing to the Collingwood onlookers last Saturday to see how Dave Drummond walked around his opponents on Victoria Park. Dave’s injury of last year has left no ill effect.”

Unfortunately that proved to be an optimistic forecast. After the following week’s game, against Fitzroy, the Herald reported: “Dave Drummond put his knee out of joint last Saturday. Will now give the game a rest.”

And that was it for Dave Drummond and elite level football. He later moved to Kerang, where he became heavily involved in the local community, running the local drapery store and regularly winning prizes for his rose-growing. He also kept playing footy for the Brigade club, as well as cricket and bowls, and was captain of the Kerang Bowling Club and secretary of the Murray Valley Bowling Association when he died in 1938, aged 65. By then he had at least had the pleasure of seeing his nephew, Tom, captain the club, near the end of a fine career that netted him nearly 100 VFL games.

In the end, Dave Drummond managed only five more games with Collingwood after his stunning debut season. He would prove to be the first of many Collingwood players whose careers were ruined by injury.