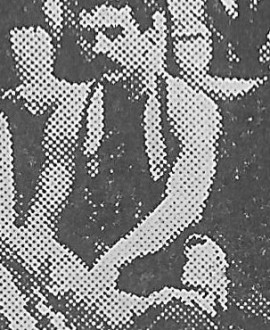 Recruited From
Tasmania
Collingwood Debut
Round 2, 1894

Dave Plant only played three games for Collingwood in 1894, but he remains one of the more colourful characters to have pulled on the club’s guernsey during its formative years.

Although he was born in Upper Plenty, he moved to Tasmania at the end of the 1880s to further his athletics career. A printer by trade, he had been living with his widowed mother in Carlton when an opportunity arose to earn money running professionally in Tasmania. But in a taste of the headlines that would follow him, he was charged with making a false declaration in relation to his running soon after arriving in Hobart – a charge that was later withdrawn.

While in Hobart he played football with the City club. Early in 1893 he wrote to the St Kilda Football Club, inquiring after a place in the team – code in those days for looking for payment to play. St Kilda FC replied by stating that “we cannot hold out any inducement to him to come over”.

Later that year he was knocked out after he “came into rather violent contact with one of his opponents” while playing in the South v North match in Tasmania. He was taken to hospital and did not wake again until late that night, after fears were initially held for his wellbeing. He reported still feeling “seriously ill” a month later, and declared he would never play football again and would head back to Victoria as soon as he was well enough. A benefit match was even played in his honour late in the season.

Yet remarkably, by the time the 1894 season rolled around he was plying his trade with Collingwood in the VFA.

By the time he came to Victoria Park he was nearing 26, and Plant had already achieved sporting fame as one of the country’s finest sprinters. And it was his speed that was the standout feature of his play as a footballer, where he most often featured on the wing.

The reviews after his first games with the Magpies were hugely positive. “A speedy Tasmanian who opened the game as though he were going to take a very important share in it, but made mistakes,” wrote The Argus after his debut against Fitzroy in Round 2. ” His pace is fast and his kicking sure. He is something more than a runner – he is a footballer.” The Collingwood Observer agreed: “With his pace and quickness in turning he should be a valuable player.” “He promises to bloom into a good ‘un for the Wood,” wrote The Herald. “He is brilliant on the wing.”

But after those three exciting games, Dave Plant disappeared: there had been rumours he was going to return to Tasmania but didn’t, but nor did he appear again for the Pies. He re-emerged the following year with Fremantle, where he played 11 games and was part of a premiership side. He was also named as one of the centreline players of the season by the Western Mail.

But controversy seemed to follow Dave Plant everywhere, and it was no different in the west. He spent most of his life involved with sport, especially betting, boxing and racing.

On moving to Fremantle he became a turf commission agent (one who placed bets on behalf of owners or trainers with bookmakers or turf accountants, and who also may have placed bets for members of the general public) and also ran ‘one of the finest hairdressing saloons in the port’.

But in 1895 he sparked a riot in the ‘roughest and most spiteful ever played in Perth’ as Freo beat Rovers in a postponed match in October that decided the premiership. Plant clobbered an opponent named Liddelow in a ‘cowardly’ manner late in the game, leading to a mass crowd invasion. He had to be escorted from the field by police before the game could resume, and they hustled him into a back room from which he was able to escape through a back door. Plant later pleaded provocation in that he’d been insulted both on and off the field by the opponent, and despite initial calls for him to be suspended for life, ended up being rubbed out for only two games.

Liddelow initiated legal proceedings against Plant for the assault and the matter went to court. He was found guilty of what was described as “a dastardly act” and fined five pounds, the maximum allowed under the laws of the time. But the magistrate said he would certainly have jailed Plant if not for the fact that Liddelow had expressly asked for that not to be an outcome of the case.

A motion was subsequently raised – and passed – by the West Australian Cricket Association (which had control of the ground where the incident had taken place) that Plant be banned from entering or playing on the WACA ground for life!

There are no records of Plant having played football or cricket at a high level thereafter. Instead he seems to have focused on his bookmaking and salon businesses, while still running occasionally. In 1896 he was the victim of a ‘sting’ in betting on a boxing match in WA and lost more than 70 pounds – a huge sum at the time. But it is hard to feel sorry for him, because he had himself been trying to produce a ‘dodgy’ outcome with his betting: he was double-crossed in the end.

Dave Plant always seemed to be on the move – whether on the football field or in life more generally. There seems little doubt he had the talent to have forged a longer career at the top level, but perhaps he had too much going on for football to be the focus that would have demanded.