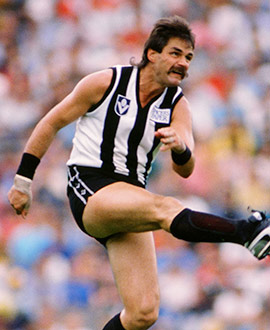 The Collingwood-Richmond recruiting wars of the 1980s have long been seen as synonymous with waste, and emblematic of the New Magpies’ well-funded-but-poorly-executed approach to grabbing players from other clubs.

But there was at least one high profile target that the recruiters absolutely nailed – and that was Tiger skipper David Cloke.

Despite the fact that he was among the highest-priced of the recruits, there is not a Collingwood supporter who would argue that the club did not get great value from the big bloke. In his seven years at Victoria Park, Clokey played 114 games — and in each one he gave absolutely everything he had. He also became a great clubman who ended up as one of the most popular personalities at Victoria Park. And the Pies would continue to reap the benefits of his decision to change clubs long after his retirement, thanks to the father-son rule.

Clokey gave great service to Collingwood from the time he walked through the doors after the 1982 season. On the field that was reflected in seven consistent seasons characterised by a succession of lion-hearted performances in the ruck or at centre half forward.

Cloke had not really been a ruckman at Richmond; he had played mostly at centre half-forward or in a forward pocket. At Collingwood though, he took on a greater share of the ruckwork, despite the fact that at 193cm (6ft 4in) he regularly conceded a significant height advantage to his opponents. What he may have lacked in inches he made up in heart, experience, superb use of the body and wonderful judgement.

Many are the times that Cloke outwitted and outbodied taller opponents. Even against the best ruckmen of the day he was rarely beaten in ruck duels. At worst he would negate their impact on the game, at best he would come out on top. He also perfected the art of playing a kick behind the game, and picked up many, many possessions in this way. He was tireless, and would run in the ruck all day if necessary.

Cloke was equally valuable away from the following division. At centre half-forward, in particular, he was terrific. He had good, strong hands that could haul down marks under the most intense pressure, but he was also adept at knocking the ball away from marking contests or out of packs for his smaller teammates to run on to. He also did a lot of hard, physical work breaking up packs, shepherding, bumping and generally clearing a path for the team’s running players.

The most obvious weakness in Cloke’s game was his kicking, which Peter Daicos once described as the worst he had ever seen. He certainly had an ungainly and ugly style and was prone to some inexcusable misses from close in, but by and large his kicking was effective — after all, he managed to score more than 300 goals in his career and could unload the occasional booming torpedo punt with success.

Cloke was made vice-captain on his arrival from Richmond, a move which surprised many people (himself included). But over the years he more than justified the appointment. In just his second season at Victoria Park he finished second in the Brownlow, and third in the Copeland.

As both a player and clubman David Cloke had few peers throughout the ‘80s. “I have never played with a greater professional,” said Tony Shaw. Mark Williams paid tribute to the example Cloke set to younger players around the club.

By the late 1980s, Collingwood had become home for David Cloke. He wanted to play his 300th League game in a black and white jumper and finish his career at Victoria Park. But during 1989 it became increasingly clear that he did not fit into Leigh Matthews’ game plans, and at the end of that year Collingwood let him go —just 10 games short of joining the 300 Club. So he placed himself in the internal draft and wound up back at Richmond, where he played a further two seasons, finishing his career on a neat 333 games.

That move provided a nicely symmetrical end to a career which had started at Punt Rd back in 1973. He played junior football with Oakleigh, most often as a full-forward where his awkward style was not enough to stop him winning the team’s goalkicking award a few times. He started out as a Geelong barracker, but switched allegiances when elder brother Peter went to Richmond.

In 1972 the younger Cloke tried out with Richmond under-19s, but was told he was too small and should return to his junior club. During that year he grew about six inches and by the time he returned to Punt Road for another try in 1973 the Tigers were keen. He spent most of that year in the reserves and played his first senior game in the early part of 1974. Over the next nine years he became one of the Tigers’ prime movers, one of the best-performed players in the side and one of the VFL’s most feared and physical competitors. Cloke was appointed Richmond captain in 1982, but by the end of that year felt stale and wanted a new challenge from his football.

The challenge that appealed to him most was the prospect of helping Collingwood to break its well publicised Premiership drought. He did, too, even though he was not around to share in the spoils at the end of the day. Many Collingwood fans were disappointed Cloke was not able to be part of that great day in 1990, for the ex-Tiger skipper had become a favourite on the terraces of Victoria Park. But he’d done his bit in laying the foundations.

Even if he’d never set foot inside Collingwood again, Clokey would have gone down as one of the club’s best ‘buys’ of all time. But like the best bargains, there was still more to come.

In the early 2000s, his three footballing sons – Jason, Cameron and Travis – all opted for the Magpies, rather than the Tigers, under the father-son rule. Jason and Cameron were handy, but Travis turned out to be a star – winning a Copeland, playing a key role in the 2010 flag and stamping himself as the best power forward of his generation.

For Collingwood, David Cloke was the gift who kept on giving.