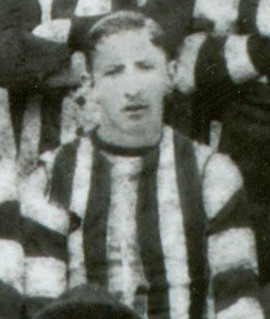 A talented flanker, Denis Lanigan holds the unique distinction of being the first player in VFL/AFL history to have played for three different clubs.

He first emerged onto the scene when he played a couple of games for Collingwood in the VFA season of 1895. He then became a semi-regular in the club’s first season in the newly-formed Victorian Football League in 1897, playing 11 further games – mostly on a wing or at half-forward – and snaring a few goals.

But after that promising season he won himself another little piece of history by being the only player to seek a permit to change clubs at a special VFL meeting in May of 1898. He sought, and was granted, a clearance to play with Melbourne. A year later, and after 16 games with the Redlegs where he was moved into defence, he was granted a clearance to Carlton, where he would play a further 14 games in his only season.

Those are decent numbers: 11, 16 and 14 games in three seasons with three good clubs. Yet he never seemed to want to hang around.

It was a similar story with his cricket. A highly talented all-rounder, Lanigan was playing with Richmond Cricket Club when he first rose to prominence as a footballer. At the time he moved from Collingwood to Melbourne he was described as “the well-known MCC ground bowler”. Then, after his first season of football with Carlton, he jumped ship and donned the whites at Princes Park too. He certainly wasn’t afraid of new environments.

Surprisingly, he didn’t appear at senior VFL level again after the 1899 season. He was cleared by Carlton back to Collingwood Juniors midway through 1901, and he played there for a number of years. He continued to play cricket, and was chosen as part of a Victorian 18 to play England 11 in 1903.

There is something missing in Denis Lanigan’s story. He played 43 senior games as either half-back or half-forward, and did well enough to be a near-regular with three different teams in three different seasons. But he never stayed, and nor did he progress. Exactly why his career panned out that way is something we’ll probably never know.