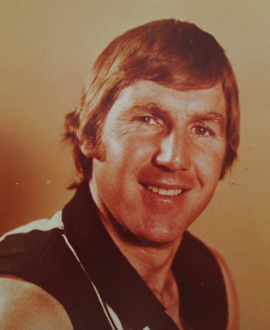 IT’S rare when the winner of Collingwood’s best first-year player doesn’t front up to the club for the start of the following season.

It’s even more unusual when that player cites farming – not football – as the reason for his absence.

But that’s precisely what happened with Collingwood’s reliable defender Denis O’Callaghan, who took out the recruit of the year honours in his 1968 debut season after playing 18 consecutive games.

Yet by the time the 1969 preseason began, O’Callaghan had returned home to the tiny outpost of Tiega, which the Herald called “a dot on the map which can’t even boast a local store.”

Situated near Ouyen in the Mallee, O’Callaghan’s family ran a 6000-acre sheep and wheat farm at Tiega, and he was needed to help out on the property.

His original pathway into the VFL had come when Tiega’s secretary recommended the teenager to Graeme Fellowes, whom he knew, saying “he wasn’t a bad sort of footballer.” Hardly a ringing endorsement, but O’Callaghan went down to Victoria Park for a few reserves games before returning to play a part in the local club’s 1967 premiership in the Mallee Football League.

That led to his breakthrough VFL season in 1968, which started on a forgettable day in Round 3, 1968 when the Magpies kicked 2.19 in an embarrassing loss to St Kilda and were briefly on the bottom. The rest of the season was a triumph for the youngster as he quickly established himself as a solid, reliable defender.

The Pies thought they’d found someone who would be part of their defence for the next decade. That just made his absence at the start of 1969 more noticeable. Well-known Herald photographer Bob Buchanan even travelled more than 450km north west to the O’Callaghan farm, where he took a picture of Denis sitting on the railings with a flock of sheep in the background.

The 20-year-old’s ties to Collingwood were clearly on show in the picture. He was nursing a dog called ‘Tuddy’, whom had been named after Des Tuddenham, O’Callaghan’s captain the previous year. In the accompanying article, it was said: “Farmwork is more important than football to promising Collingwood defender Denis O’Callaghan, who won the club’s best first-year player (in 1968). O’Callaghan works on his parents’ 6000-acre property near Ouyen where they run 1200 sheep and have 1200 acres of wheat. (He) will not be available to play (for the Magpies) until halfway through the season.”

But what the young footballer hadn’t revealed was that he was desperate to return as soon as he could arrange it, and the Magpies kept working on ways to get him back to Melbourne. By the middle of 1969, he had made a welcome return to Victoria Park. He played a few games in the latter part of ’69, but it wasn’t until 1970 that he really found his form again. Indeed he scarcely missed a beat during the Pies’ stellar 1970 campaign, playing all 24 games and amassing a career-high 357 disposals.

This was the year when O’Callaghan cemented his reputation as a solid, no-frills back pocket player. He was a remarkably safe mark, a solid kick and capable of playing tight on some of the game’s most dangerous forwards. In a team with plenty of stars, O’Callaghan was one of the ‘quiet achievers’ who just went about his business with a minimum of fuss and no small amount of skill. The Sun newspaper said he was “a reliable long kick … one of the most reliable (players) in the business. Not spectacular but opponents know they’ve played against him. Backs his ability to outmark an opponent more often than he resorts to spoiling, and often manages to win marks against bigger opponents. Safe in ground play and a good clearing kick.” He wasn’t flashy, but was invariably described as being “reliable”, “solid” and “dependable.”

Those three descriptions made him one of the more valued players to the team.

Late in that 1970 season the Sun’s Kevin Hogan pinpointed O’Callaghan as a key Magpie player. Like his team, he started the grand final on fire. We all know how that ended, but O’Callaghan had a unique memory of that day, being the closest teammate to ‘Jerker’ Jenkin when Alex Jesaulenko used him as a stepladder. When David McKay kicked the ball out near the Members’ wing, O’Callaghan thought Jenkin was certain to get the ball. As recounted years later, the defender apparently said: “It’s yours, Jerker – you’re on your own.”

He went on to be Coburg’s playing coach in 1976, only just missing out on the finals, then joined Brunswick and later played with Montmorency – the Magpies of the Diamond Valley Football League.

Denis O’Callaghan has been a regular fixture at Collingwood past players’ gatherings over the years. The quiet, humble kid who came to the big smoke more than 50 years ago – and stayed – is still popular amongst his former teammates and fondly remembered by the fans.