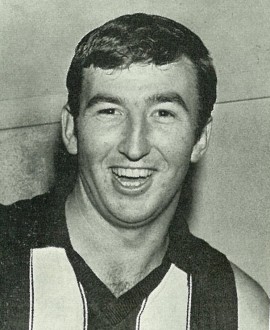 Footballers can take many different pathways to the top, but Dennis Le Gassick’s journey was almost a classic example of the way it used to work. One year in the under-19s, followed by a second year with a taste of reserves footy, then a season spent entirely with the seconds, before – finally – a senior debut.

Unfortunately his time at the top was briefer than he would have liked – injuries and opportunities saw to that – but it was still the kind of ascent that so many footballers would have been familiar with in the days when the under-19s still roamed the fields.

Dennis came from a footballing family. One of his brothers, Ron, had played with Collingwood’s under-19s in 1959, while another brother, Rick, played seconds and thirds with Melbourne in the early 1950s. Their father, Eric, was a timekeeper for the Melbourne under-19s and reserves for 20 years.

Originally recruited from Ivanhoe Amateurs (he’d won their under-19s best and fairest in 1964), Dennis played 20 games with our under-19 team in 1965 and was a member of that year’s Premiership side. He played a further 19 games at that level in 1966, plus a couple in the reserves, winning the thirds’ best and fairest. By 1967 he became a regular with the seconds, playing 19 games and finishing third in that team’s best and fairest count.

Everything pointed towards senior selection coming some time in 1968 – and he didn’t have to wait long, being chosen against Richmond in the opening round of the season. He was named on the bench and came on to replace Colin Tully in the third quarter. The Age later reported that he “got a useful number of kicks as a rover” after coming on.

His use as a rover in that first game was a bit odd, because he’d mostly played at centre half-back and centre half-forward in the thirds and reserves, positions he would also return to at local levels later in his career. But at senior VFL level he was pretty much the classic utility player: not quite tall enough for a key position, but too tall to be a rover. So mostly he found himself at half-back or half-forward, though he could be thrown into most spots and do well. He was a good reader of the game, with a good footy brain, and he had good pace for a bloke who stood about 6’1” in the old language.

Dennis played the first five games of the 1968 season, mainly coming off the bench, and one more a couple of weeks later. But then he injured his ankle and missed four weeks, after which he couldn’t break back into the seniors. His 1969 season was disrupted by a broken thumb, and he was limited to just two more senior games, although he was chosen to play for Victoria’s seconds against NSW. In 1970 he seemed to once again be stagnating in the reserves, so took the opportunity to cross to Preston as part of the deal that brought ‘Big Bob’ Heard to Victoria Park.

Dennis kicked more than 50 goals as a half-forward for Preston in 1971, but stopped playing in 1972 due to the pressures of having three young children (including twins) under 15 months. He returned to the Bullants in 1973, and later captained Reservoir Lakeside, leading them to flags in 1975 and 1977 (where he played alongside a young Tony Shaw), then captain-coached Sorrento, where he guided the team to back-to-back flags in 1979-80.

He returned to Collingwood in 1981, where he was development manager for three years, before moving to the Gold Coast with business in 1984. He would later spend 12 years as President of Gold Coast Basketball and he was also Chairman of the Gold Coast Rollers basketball team in 1990. His son Brendan would go on to play in the NBL and represented Australia overseas.

Despite that long history of sporting involvement, Dennis Le Gassick always regretted leaving Collingwood in 1970. He was only 23 at the time, and perhaps there would still have been opportunities to build on his eight senior games. And as many others have learned before and since, there’s nothing that comes close to playing footy for the Pies.