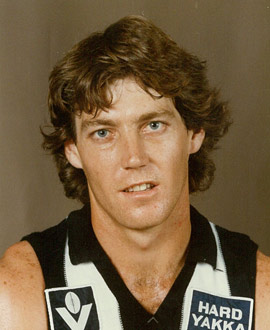 DEREK Shaw was one of five Shaws to represent Collingwood at senior level through the late 1970s and early ’80s, though he was different from the rest.

For a start, he wasn’t a part of the Shaw dynasty, even though he hailed from the Magpie-mad northern suburbs. He wasn’t related to Tony, Ray and Neville Shaw who wore the black and white during his time at Victoria Park and formed one of the club’s famous families. He also had no connection to Collingwood’s high-priced recruit Gary Shaw, whose pathway stemmed from Queensland and Western Australia.

Physically, Derek was in stark contrast to the other Shaws too, standing at 194cm – 24cm taller than Tony, and around 20cm taller than Ray, Neville and Gary. That still didn’t stop the 1978 Qualifying Final Football Record using Derek’s face alongside Tony’s profile, prompting some mirth within the club.

Derek would go on to play 47 games and kick 32 goals for the Magpies across six seasons as a key forward and sometime ruckman, punctuated by a one-season switch to South Fremantle.

Shaw was recruited from Bundoora in the Diamond Valley, where he had shown considerable promise as a centre half-forward, a position he had played since he was 10. He came to Victoria Park as a 17-year-old in 1976 and played nine games in the under 19s before graduating to the reserves. In 1977 he bagged nearly 50 goals from his key forward post.

Size was always his asset, which had been the case since his junior days. And when Murrie Batt left to go to Port Adelaide on lease midway through 1978, it opened up a spot for a versatile big man. Shaw took over Batt’s spot in the ruck in the reserves and within two weeks was chosen to make his senior debut against Melbourne.

He played mostly at centre half-forward in his nine senior games that year, and did OK without setting the world on fire. He was a strong mark, a thumping kick and seemed agile enough to cause problems for defenders. He was also a more than handy goalkicker. The Magpies seemingly had him flagged to help take over from Len Thompson, who was by then nearing the end of his career.

The club said Shaw “had everything going for him”. They were confident he would be a top player once he gained confidence, and also learned from Thommo and others. And sure enough he managed to secure a spot in a highly-competitive Magpies’ team in 1979. Having moved to the No.4 jumper (from No.44) , he played 15 games for the season, predominantly as a forward and ruck back-up to eventual Brownlow Medallist Peter Moore, kicking 21 goals for the season.

But he began to run out of steam late in the year, and his season finished ignominiously on a wet and wild Grand Final day when he failed to have a possession. He had one hit out and gave away two free kicks in what the Herald Sun’sJon Anderson would term “a game he’s unfairly remembered for.”

The Magpies figured the 20-year-old would come back stronger the next year for his experiences, but he wouldn’t be back at all in 1980. During the pre-season he told the club he was “sick of football” and ended up in a legal battle against Collingwood in an effort to join South Fremantle. Shaw moved to Perth and started training with the WA team, even taking legal action to secure his release.

The Pies eventually relented and released him to South Fremantle, where he played in their 1980 premiership side as a forward and relief ruckman. Ironically, after that he decided he wanted to return to Victoria Park – so found himself back in the courts after South Fremantle issued a Supreme Court writ to try to keep him.

By mid-April he had been granted his wish to don the black and white again. But injuries and inconsistent form limited him to only one game in 1981, and a further three in 1982. He played the first six games of 1983 under new coach John Cahill, and 13 more in 1984 before the Pies’ patience ran out. They had given him numerous chances to make good on his undoubted promise – obviously believing the old adage that big men can take longer to mature – but in the end he wasn’t able to deliver at a good enough level, frequently enough, for them to keep him on the list after David Cloke arrived and Wes Fellowes emerged.

Shaw was leased to West Adelaide in 1985 as part of a deal that saw Dale Woodhall and Ron Andrews also join the SANFL club and Tony Burgess to join the Magpies. That was the end of Shaw’s 47-game, 32-goal career with Collingwood, but thankfully not his time in the game.

He would go on to a long and distinguished career at local level, joining Greensborough in 1987 (where he would win two best and fairests) and later Macleod, as well as coaching several teams in Diamond Valley Football League and neighbouring leagues. His links to Greensborough and Macleod – where he was later club president and where his son, Kane, became a star – led to the clubs playing for the Derek Shaw Cup (the first two such matches were drawn!).

Derek Shaw is unfairly remembered for his horror day at the MCG in September of 1979, but his career was much more than that. And even though he never quite reached the heights the club – or he – had hoped for, he was still a valuable part of the club over a senior career that spanned seven years.