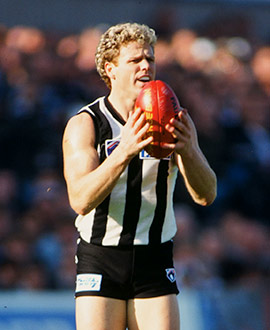 One of the most exciting players of his era, Brereton’s flamboyance won fans and infuriated rivals. He is famous for having won five day and five night premierships for Hawthorn during their golden era in the 1980s and early 1990s, but his twelve months at Collingwood saw him cast in a support role.

But don’t let the job description fool you.

Brereton’s ability to teach a young Saverio Rocca the ropes from a forward pocket while still kicking 30 goals from 15 games made him a valuable contributor at the age of 31.

In fact, many a pundit has credited Brereton’s influence as a key factor behind Rocca’s career-best 1995 season, in which he kicked 93 goals and won his only Copeland Trophy.

Recruited in the pre-season draft after a twelve-month stint with Sydney, Brereton played his first match in Collingwood colours against Geelong at Kardinia Park in round three. He didn’t disappoint, kicking four goals in a 27-point loss.

He was a solid contributor in the 14 games that followed, kicking two or more goals on eight occasions with a high of five against the Cats in round 18. He played his 200th senior game in a heavy loss to Richmond in round six, kicking one goal from four disposals.

The curtain came down on Brereton’s 211-game career (and that of Gary Pert) at the SCG in round 22, when his three goals weren’t enough to prevent a loss to the Swans.

Brereton’s successful season is but a footnote to his career, considering the magnitude of his achievements at Glenferrie.

Hawthorn recruited him from Frankston Rovers and he made a sensational debut in the 1982 finals series with five goals against North Melbourne in the first Semi-Final.

It was the first of many examples of his unparalleled big game temperament. He loved nothing more than the heat of battle in its various forms even when it extended to such unusual actions as barging through the opposition’s three-quarter time huddle.

Yet his courage was beyond doubt especially in the heroic effort in the 1989 Grand Final when Geelong’s Mark Yeates decided to get in first and ran through Brereton in the opening moments.

In mid-1986 he hurt his ankle in the gym when he rolled it stretching for a medicine ball. For the next two years it hurt, but he played on with it taped. When operated on for a stretched ankle ligament it was found that the bone had been cracked!

The ferocity with which he attacked the ball took its toll on his body and by the time he was 27 he felt like a 37 year-old and he found that his once famous spring deserted him.

In later years he had to come to grips with being unable to do things he had done earlier.

Brereton always had unlimited confidence in his ability to better any opponent and he revelled in the spotlight.

His affairs were eventually managed by the International Management Group and he assumed a huge media profile.

His nickname of “The Kid” originated from an early game in the under-19s when he was on the bench and coach Des Meagher berated a player and said he would replace him with “the kid over there”.

He won Hawthorn’s best and fairest in 1985 and represented Victoria nine times.

A chronic hip complaint meant that he played only six games in 1992 and none in 1993.

He was still in the headlines when he copped a fine said to be worth $12,500 for criticising the Hawthorn match committee late in 1993.

He refused to accept a reduced contract for 1994 and made the move to cross to Sydney.

In retirement, Brereton forged an enormously successful media career. He was touted as a potential senior coach of several clubs in the late ‘90s, but he spurned the chance to lead a club in his own right.

Instead, he led Australia in the International Rules Series in 1999 and 2000, returning victorious on his second attempt.