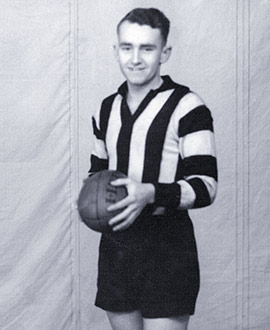 Sometimes, when talking about players of the past, it is too easy to rhapsodise about their qualities: every player can easily, and perhaps undeservedly, become ‘one of the greats’ when viewed through the rose-coloured glasses of history.

But every so often, the raw facts of a player’s career are so jaw-droppingly extraordinary that they render any argument about his greatness redundant. And so it is with Collingwood’s wunderkindof the late 1930s, Des Fothergill.

Just consider this: he first played for Collingwood as a 16-year-old in 1937, introduced into a star-studded Premiership team that was on its way to another Grand Final. Despite the big names around him, and despite missing six games, he won the Copeland Trophy in that first season. By the age of 20, he had played four seasons of senior football – and won the Copeland in three of them. In the last of those seasons he also won the Brownlow Medal.

In the entire history of the Collingwood Football Club, only the mighty Albert Collier – with one Copeland and a Brownlow – has even gone close to matching that start to a career. No wonder then that, after just Fothergill’s second season, Magpie president Harry Curtis made this bold prediction: “I feel certain that in Des Fothergill, Collingwood has one of the greatest players of all time. In fact, I think he is going to develop into the greatest player Australia has known.”

In the end, the only things that stopped Curtis’s prediction coming true were the Second World War, the lure of big money in the VFA and Fothergill’s close friendship with Ron Todd.

Des Fothergill started his football life as the best possible advertisement for the club’s famed schoolboy competition that started in the mid-1930s. These were games played between local school teams as curtain-raisers to VFL matches at Victoria Park. Fothergill had been born in Northcote but raised in Preston, and later captained both the cricket and football teams at Collingwood Tech. That school was part of the curtain-raiser competition, and seconds coach Hughie Thomas noticed his domination there – especially after he won the Bruce Andrew Cup in 1935 for best player in the final match between combined schoolboys from Collingwood and Footscray.

The next year, aged just 15, Fothergill played under Thomas in the Magpie seconds. Sure enough he won the team’s best and fairest and goalkicking awards, bagging a handful of five-goal hauls along the way. At the same time he was also blitzing them in cricket, already having played with Northcote’s senior XI in district competition The boy was a sporting freak.

But some officials, including Jock McHale, still harboured doubts about him, wondering whether his strong-hipped, low-to-the-ground build would make him too slow for senior football. So Fother started the 1937 practice matches in the early games for those considered furthest from senior selection. He starred in one, being best on ground. A few minutes later, he was sent into the second match when another player failed to turn up. Despite playing back-to-back matches without a break, Fother kicked a lazy 10 in the senior match and was best on ground there too. He got his chance six games into the 1937 season – he remains the eighth youngest Collingwood player – and by the end of the year was the club’s youngest-ever Copeland Trophy winner.

A year later newspapers were already describing him as ‘the kingpin around which the team revolves’, and he was the club’s best player in the 1938 finals, stunning critics with a trio of outrageous performances: six goals in the semi against Footscray, five in the preliminary against Geelong and four in the Grand Final against Carlton. All this and he’d just turned 18.

Years later, Fothergill would come to be likened to a more recent Magpie hero, Peter Daicos. He certainly shared Daicos’s low-slung build, innate understanding of the game, and his ability to create space where none existed, or to twist and turn out of trouble with deft movements – a dip of the shoulder, a little swerve to one side, a fraction of increased speed. He also shared Daicos’s near-perfect kicking and unerring accuracy in front of goal, whether with snap kicks or long, direct shots (he kicked more than 50 goals in five of his six seasons at Collingwood). He played mostly as a half-forward or rover, and wherever he was stationed he was simply magical to watch.

But there was nothing ‘showy’ about the way Fothergill played. Not for him the more elaborate and fancy evasive techniques of his equally dangerous teammate Alby Pannam, or the high-flying athleticism of his great friend Todd. Instead there was a quiet, cool, precise, almost ruthless feel to the way Fother would take a game apart. He was perfectly balanced, and played with the unhurried movements of one with time to spare. Like the very best players, he made everything look so damn easy.

He wasn’t outrageously quick, but he made up for that with sublime elusiveness. There was no more difficult player to mind in football. He read the play beautifully, and had the happy knack of being able to get on his own when the ball was heading towards him. Hec de Lacy, in the Sporting Globe, branded him ‘the brainiest player in the game.’

“He plays football with a minimum of effort – without a trace of flashness or an atom of selfishness,” he wrote. “His football is effortless – yet to opponents terrifying in its deliberateness. He moves to the seat of the action, acquits himself with a minimum of movement, does his deadly work, then drifts on.”

In 1950, Richmond’s Jack Dyer wrote: “He had the uncanny power of seeming to know just where the ball would land. It was amazing – Fothergill even seemed to be waiting under the miskicks! Sometimes he was like twins, even triplets. He seemed to be everywhere at once, and his anticipation was uncanny. I have never seen his equal.”

Unfortunately for Collingwood, young Des was also a pragmatist. At Collingwood’s annual meeting in 1939, Camberwell approached him with a huge offer. Rather than just dismiss it out of hand, Fother said he’d think about it. That was a bad sign. At the end of that year, Ron Todd succumbed to an even more generous offer and joined Williamstown.

Todd and Fothergill were something of an odd couple – Todd loud and almost brash, Fothergill quiet and shy to an almost ridiculous level – but they became the best of mates, sharing a love of horses, footy and socialising. During the 1940 season, they’d often be seen at local dances and functions together, including many run by the Williamstown Football Club. So it was no surprise when Willy made Fothergill a huge offer just days after he’d won the Brownlow. This time, Fothergill said yes.

The Magpies were devastated, but the fans perhaps even moreso. Partly because of his youth and partly because of the thrilling, ultra-fair way he played, Fothergill was the darling of the Collingwood crowds. So there was widespread dismay at his departure.

He was, of course, far too good for the VFA, and in his only season there won the competition’s two top awards by a huge margin. Fothergill then joined the army but in 1944, while playing services football in the Northern Territory, badly injured his knee, army doctors later having to remove two pieces of bone.

There was major excitement and anticipation around Collingwood when it was announced that Fothergill would be coming back for the opening game of the 1945 season. He was almost a stone heavier, and his knee injury had been widely reported, so expectations were tempered. But Fother kicked five that day, 62 for the season and won the Herald’s award as best player of the season. Next year he went one better, topping the league’s goalkicking table with 63 goals. It had been an extraordinary return.

But Fothergill hurt his knee again late in that 1946 season. He tried to go on in 1947 but had to retire after just three games (in which, incidentally, he’d managed to kick five, four and three goals while on one leg). He was still only 26.

His cricket was less affected. He made his maiden first class ton late in 1947 and ended up playing 27 games for Victoria, frequently being mentioned as a Test hopeful with his aggressive batting and handy leg-spin. He also played 149 games for Northcote and was named in that club’s Team of the Century.

But that mattered little to the Collingwood football fans who had seen the last of their idol. His move to the VFA, the intervention of war and the advent of serious injury all contrived to deprive football of Des Fothergill’s best years. But based on the evidence of his first four seasons, and what he was still able to achieve in his second stint, it seems that Harry Curtis may well have been right: if fate had been kinder, we might well be talking about Des Fothergill as the greatest Collingwood footballer of them all.