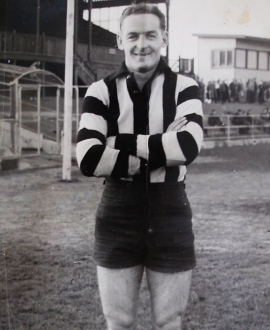 Des Healey’s last two grand finals with Collingwood could not have been more different. In the first he was the best player on the ground as his team won a stirring, against-the-odds Premiership. In the second, he was knocked out and stretchered off the field late in the game courtesy of a shirtfront so brutal that it ended not only his afternoon but also his career. And his team lost.

That is the Des Healey story. Or at least the highest and lowest points of his story. Unfortunately, the headlines and controversy around the way he exited League football have tended to obscure much of what went before – and in particular the role he played in one of Collingwood’s greatest-ever grand final triumphs.

In 1953, Des Healey was, in the opinion of many, the best wingman in the game. He was named all-Australian that year, finished third in the Copeland and on grand final day against the highly fancied Geelong kicked two crucial goals and racked up 25 possessions. He was spotted reading a comic in the rooms before the grand final but that didn’t seem to distract him and he came out ready to fire, kicking the first goal of the game with a glorious drop kick on the run.

Healey was brilliant that day. He had dazzling pace, superb evasive skills and exquisite ball control. He could twist, turn and baulk at top pace, even while bouncing the ball, and possessed a left-foot every bit as good as his fellow wingman Thorold Merrett (Merrett, actually, felt that Healey was a superior kick). And all of those skills were on display throughout the two hours on grand final day. In the end it was a close-run thing with Ron Richards, but most had him marked down as the best player on the ground.

“Des Healey took charge of his wing early in the game and never sun surrendered his position,” wrote the Sporting Globe. “His accurate passes with his deadly left foot invariably found a forward. Healey’s display on the wing was acknowledged by all as the equal of anything seen in that position for a long time.”

Healey’s performance that day capped a long, steady climb to the top. He had always wanted to play for Collingwood, having grown up in the Magpie zone and been a fanatical supporter as a child. He was born in Westgarth but raised in Reservoir and later Preston, and showed great promise with Preston YCW under-age teams. He won a couple of competition best and fairest awards, and that was enough to get him an invitation to Victoria Park in 1945.

An unexpectedly long apprenticeship followed. Despite winning over his reserves coach, Bervin Woods, almost immediately, Healey took more than three years to crack a senior game (it might have happened earlier but he turned in an absolute shocker on a day when Jock McHale had specifically come to check him out). In the end he had played 58 reserves games, won the best and fairest in one season and finished third in another before finally getting a taste of senior football.

Once he did, there was no looking back. He played every game in 1948 and missed only one in 1949 when, in just his second year of VFL football, he won interstate selection. He continued to work hard at his game, often spending extra nights alone on the training track perfecting his skills. He would place sticks or pieces of paper on the ground, boot the ball as far as he could, sprint after it, gather it, twist and turn around imaginary opponents at top pace then straighten up and drill a pass over one of the markers on the ground. He even developed his weaker right foot – something that was unusual in those days.

In the first half of the 1950s he joined forces with Bill Twomey Jnr and Thorold Merrett to form one of the most exciting centre line combinations the game has seen – and all left-footers at that. He was often compared to Merrett, and each seemed to take pride in being likened to the other. The two played cricket together, and once put together a match-winning century partnership in a grand final where Healey knocked up a hundred (he was a brilliant batsman who regularly played for Collingwood in District cricket).

On the field they formed a blistering combination, and debate often raged around who was the better. Lou Richards just gave Healey the nod, as did Essendon great John Coleman, who said Healey was the best wingman he had seen. In 1955 the Sporting Globesaid Healey had been the most consistently brilliant wingman in the VFL during the fifties. “He is fast, heady, a superb ball-handler and a delightful kick,” it said. Richmond’s Brownlow Medallist Roy Wright also noted an often-overlooked element of Healey’s play – the way he threw himself into contests. “If he were a big man he would kill someone the way he tears through packs,” he said. “He is one of the gamest players I’ve seen.”

Late in the 1955 Grand Final against Melbourne, Healey grabbed the ball on the MCG members’ wing with a virtual ‘open paddock’ in front of him. As he raced along the open spaces, looking upfield, Melbourne’s Frank Adams suddenly appeared from the reserves’ bench, and sprinted at Des from his blind side to intercept him. The two clashed head-on in what is still remembered as one of the most sickening collisions in football history. Their bodies were thrown metres apart and both were taken off unconscious. Healey’s nose was broken in five places and his skull fractured, and he was still suffering dizzy spells weeks later.

That collision helped hasten Healey’s departure from the VFL. He was only 28 but, still shaken by the crash, decided to coach in Wodonga instead (where he also learned how to be a snake-charmer!). He spent eight years with Wodonga and Junee, then returned to Melbourne for stints at Preston, Camberwell and at a Thornbury junior club before spending six years as coach of the Collingwood thirds, where he had charge of up-and-comers like a young Peter Daicos.

One thing he never lost, despite the unfortunate manner of his departure, was his sense of humour. In 1956 he told the Herald: “I played in three grand finals and was carried off in two – once on the shoulders of half a dozen chaps after we won the 1953 flag, and once on a stretcher.”