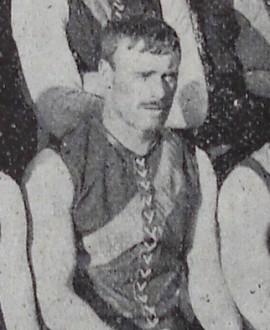 Dick Langford crammed a lot of drama into a relatively short career at Collingwood.

One of several Tasmanians who joined the club for its first season, Langford had two stints at Victoria Park, the second one ending when he was almost ‘run out of town’ after being suspected of taking a bribe. He had earlier been accused of accepting inducements to play, and in between found himself accused of manslaughter while back in Tasmania.

But putting all those issues to one side for a second, the bottom line was that Frederick Edward Langford – almost universally known as Dick or Dicky – was a wonderful footballer who enjoyed a long and illustrious career in Tasmanian football.

The Langfords played a prominent part in Hobart football. Dick was one of eight children, and his brothers ‘Turkey’, ‘Benny’ and ‘Porpoise’ were all fine players with Railway, City and North Hobart respectively.

But Dick was the best of the bunch. He started his career with the Railway club, and by the early 1890s had come to the attention of mainland clubs. The newly formed Collingwood nabbed him, along with fellow Tasmanians Bill Markham and George Watt, for their debut season in 1892 and Langford was named as rover in the club’s first ever game against Carlton on May 7 of that year (although the day featured an embarrassing moment for him when he ran away with the ball in the wrong direction early in the third quarter).

Langford was a nuggetty and highly skilled on-baller who had a great eye for goal. The Sporting Standard said he was “a cunning and dodgy man and splendid kick.” The Argus said he was “cool, knows every wrinkle in football and there is a charming finish about all he does.” “He played the Tasmanian game – fine, dashing and open football.”

The Australasian was even more fulsome, while also noting criticisms of his game: “Langford …displayed the coolness and artistic flair for which he has long been noted. He is a fine rover, but tried to do too much on occasions. He is as expert as passing the ball as any man, but he sometimes failed to give a mark when his doing so must have proved a benefit to his team. His long shots on goal always went dangerously close to the opening…”

Langford played seven games in the first half of 1892 before surprisingly returning to Tasmania, to play with the City club in Hobart. In 1893 he crossed to Railway, but that sparked a clearance row, during which the Southern Tasmania Football Association accused Collingwood of using ‘undue influence’ in trying to get Langford back. During the case, Langford produced a telegram from Collingwood offering to pay his passage to Melbourne, and the Association suggested this was evidence of ‘touting’ that should be brought to the attention of the VFA.

Langford spent 1893 in Tasmania, during which he was twice the hero for his home state in drawing intercolonial games against Victoria with late goals.

But football was in some ways the least significant thing that happened to him in 1893.

In October that year he became embroiled in a messy legal case after a woman named Marion Walker, who had been in his company that evening, was found unconscious on a city street and died in hospital the next day of a brain haemorrhage. An inquest was held, and the medical testimony went to show that the woman died from the effects of a fall or a heavy blow on the temple, causing the rupture of a blood vessel on the brain. Initially charged with indecency, Langford was subsequently charged with assault, and then manslaughter.

The jury at the inquest concluded that there was no evidence to show how the woman came by the injuries that caused her death and said Langford therefore had no case to answer. But the Coroner expressed his disapproval of the jury’s decision, and returned an open finding. Police investigations continued and Langford was eventually charged with manslaughter – though the case was discharged in December, after the Chief Justice ruled that the woman’s brain injuries could have been caused by a fall.

After all those dramas, it was hardly surprising that Langford wanted to get out of Hobart. He returned to Collingwood and by the fourth round of 1894 was back in the Magpies’ senior team. But then, after just four games, he abruptly returned to Hobart again. “His sudden departure from the ranks of Collingwood has caused some comment,” noted one newspaper.

It turns out that Langford was suspected of having taken a bribe in what proved to be his last game for the Pies, against Port Melbourne, even though some newspapers placed him among our best players that day, and the Clifton Hill Tribune noted: “In Langford the club is possessed of one of the best obtainable anywhere, and he should be more studied by the team.” In Kill For Collingwood, Richard Stremski wrote: “The committee suddenly was ‘dissatisfied’ with his performance, suspected squaring and told him to leave.”

Langford returned to Tasmania, beginning a long career with the Hobart Marine Board. And though his VFL ambitions had been thwarted, he resumed playing local footy – and ended up as a giant of Tasmanian football.

He played for a further 18 seasons with a variety of clubs, and in 1903 was voted the best all-round player in the STFA. He was a regular in Tasmanian and Southern Tasmanian representative sides, and as late as 1909 kicked seven goals in the South v North Tasmania game, afterwards being carried shoulder-high to the pavillion. He got to play with at least one of his sons, Frederick, and a nephew would later star for New Town.

In all, Dick Langford’s contribution to Tasmanian football was immense, his playing career alone spanning 23 seasons. His contribution at Collingwood was less significant – his appearance in our first ever team notwithstanding – and shrouded in controversy at the end. But there was never any doubting his ability.